Yesterday, I ate my first cricket burger and it was a surprising whopper 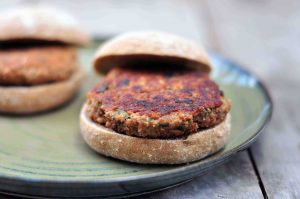 So I walk into my university cafeteria and find a pleasant young man offering free cricket burgers.

I make a face and shake my head, but free is an unbeatable, nay irresistible price.

“It’s like a vegetable burger really, you can’t taste the crickets,” says the young man.

A waitress sees me hesitate and comes over. “It’s really good,” she urges, “you won’t regret it.”

He takes a crisp brown patty and slaps it onto a burger bun, ornamenting the ensemble with a modest harvest of lettuce leaves. “All you have to do in return is complete the questionnaire and tell me what you thought,” he says handing over the takeaway box and waving me towards another counter. “Mayo and sauces are over there.”

I stand right before him and bravely bite into the cricket burger I never planned to eat. Ever.

What can I say?

It was delicious, like a cross between a falafel and a vegetable burger. It was unexpectedly inoffensive, no reminder at all that I was chomping on the remains of an insect distinctly related to grasshoppers. It was deliciously, delicately spiced – not strong but not bland either. It was the sort of patty of which you collect runaway crumbly bits, sticking a thumb on them and conveying the reclaimed fragments to one’s mouth. That’s how good the cricket burger was.

It seemed nothing like the Grass-whopper that became a runaway success in New York four years ago. That patty of fried crickets was said to be bound with melted Chihuahua cheese. My cricket burger in Norwich had no cheese at all. It was light and bright. Very English, very understated.

“Who makes these?” I ask the young man in between mouthfuls, “which company?”

Turns out Aaron, who lives in Norwich (home of the University of East Anglia where I’m doing my PhD) is passionate about promoting insect foods and turning products like his cricket burger into something we wouldn’t think twice about eating. He finances the venture himself – paying for the imported crickets (from Thailand) and all that goes into making the burgers and serving them up for free to doubters like me.

His goal, Aaron told me, is to create and popularize insect-based menus that “British people would like to eat.”

It’s a laudable project and I salute the young man’s passion (and culinary skills).

Nutritionally, insects are pretty unbeatable, especially in comparison with other traditional proteins such as beef. Ounce for ounce, crickets provide twice the protein of beef and the quality of the protein they provide is exceptional because it contains all nine essential amino acids. Researchers say that crickets also pack nearly five times as much magnesium as beef, which is key to reducing the risk of heart disease and of type 2 diabetes. Crickets also have more than three times as much of muscle-aiding iron as beef. And farming crickets for food is way better for the environment than rearing beef cattle.

I’m a convert. Thanks Aaron.