Anyone – American or not – who has considered the US war in Afghanistan would have the vague suspicion that it’s a profligate affair. And if, like me, you’ve actually seen some of the operation close up – ie from the US Embassy in Kabul – you know that it’s immoderate.

I still remember walking around the Embassy compound – a massive complex that included not just the actual Embassy but apartments, a couple of DFacs (Dining Facilities), a makeshift restaurant, a general store and a field full of residential shipping containers – and gawking at the row of wooden gazebos. I kid you not. 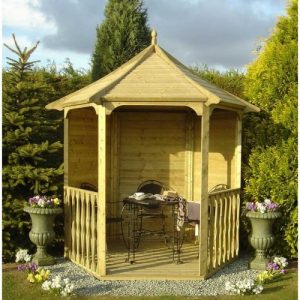 They looked something like this and each was about 20 feet away from the other. It was probably an attempt to soften the harshness of our surroundings and to provide a pleasant place for off-duty diplomats, armymen and others to sit of an Afghan evening. But the sheer number, and their proximity to each other was simply mind-boggling. No one could say why there were so many gazebos and so close to each other too. Someone pretty experienced in the ways of the US government once suggested that the gazebos had probably been bought in bulk from some company that had wangled a good deal, when the going was good. Useless though they were, the gazebos were then installed on the Kabul Embassy compound. And there they stood, providing a strange view of the American effort in Afghanistan.

Anyway, this is rather a long way to get too the newest revelation of American profligacy in Afghanistan. According to reports, $28 m was spent on “forest” pattern uniforms for the Afghan National Army even though they would have been useless as camouflage – just 2.1 per cent of Afghanistan is wooded.

US inspector general John Sopko said that the decision was “not based on an evaluation of its appropriateness for the Afghan environment” but on rather more capricious reasons. A former Afghan defence minister, Abdul Rahim Wardak, chose the privately-owned pattern in 2007, indicating he preferred it to a cheaper pattern that the US military already owned. Apparently, US officials, who were searching for patterns online with the Afghan minister, authorised the purchase because he “liked what he saw”. That’s what they wrote at the time, anyway.

Mr Sopko has expressed outrage to USA Today. “My concern is what if the minister of defence liked purple, or liked pink? Are we going to buy pink uniforms for soldiers and not ask questions? That’s insane. This is just simply stupid on its face. We wasted $28 million of taxpayers’ money in the name of fashion, because the defence minister thought that that pattern was pretty.”

Camoflage that is anything but.

That’s the strange world of the American war in Afghanistan.