Tunisia is an orange mini-superpower. No, really. In 2017, its harvest of oranges tipped the scales at 550,000 tons, which is way above its normal take of 400 000 tons. That’s not comparable with the millions of tons produced by Brazil, the US, China and so on, but it still counts for a hefty amount of orange on Tunisia’s agri-production map.

The tragedy, somewhat like India’s wheat overproduction of 2013, is that Tunisia doesn’t know what to do with its spare oranges.

It eats as many as it can. It juices oranges and drinks the sweet goodness by the gallon. It exports as much as countries like France will buy. But what to do with the vast surplus?

The mystery is that a deal isn’t struck with the World Food Programme or some similar body to produce cheap tetra-packs for regions where famine is looming (Yemen and South Sudan comes to mind).

It’s less of a mystery that Tunisia doesn’t seem to produce frozen orange juice concentrate, as in the US. The latter has a well-developed cold chain. Not so countries like Tunisia.So, for the moment, Tunisia’s options are to eat what it can and export what it has been able to agree to despatch overseas.

As a recent report by the US Department of Agriculture Foreign Agricultural Service says, France remains the largest export market for Tunisian citrus (some 90 per cent of its citrus exports head to France) and efforts are underway to open up markets in the Gulf, Algeria, and Russia.

The French like Tunisia’s Maltese Oranges rather than some of the other varieties (navel oranges, clementines, mandarins and US-origin citrus such as Navelina, Thomson Navel, Encor H.B. Frost, Fortune, Minneola, Nova, Wilking, Eureka, Marsh Seedless, Ruby and Star Ruby). Even so, there’s a limit to the number of Maltese Oranges any one foreign country can take. Only 10 per cent of Tunisia’s orange crop is exported.

Interestingly, of course, Tunisian citrus production only really took off nearly half-a-century after the French colonized the country in 1881. Citrus cultivation developed mainly in Cap Bon. It later spread to Greater Tunis and Bizerte and, more recently to land-locked governorates such as Kairouan and Jendouba. As of now, 12,000 Tunisian farmers grow citrus crops. Citrus orchards cover 27,000 hectares, which is just 1.3 per cent of the fruit tree-area, far behind olives and dates. All together, 7 million trees produce oranges and lemons, and they seem to be fruiting like there’s no tomorrow.

While it may technically be a great success for a country to have a bumper harvest, the outcome matters. Just as India dealt with the problem of wheat overproduction this decade by allowing some of the harvest to perish, Tunisia may have to destroy its bumper orange crop. The citrus producers’ association says roughly half the harvest may have to be destroyed.

That would be an awful pity. The Tunisian orange is a thing of beauty and a joy to taste. 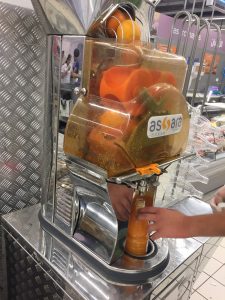 This handy French machine in the Carrefour supermarket at Tunisia Mall, Berges du Lac II, Tunis, swiftly despatches dozens of oranges into one-litre and half-litre plastic bottles in the couple of minutes it takes to fulfil the request. All for 3.59 dinars per litre or roughly $1.30 (£1). Deliciousness in a bottle.

Shame about the unused tons of oranges though. What an awful waste. 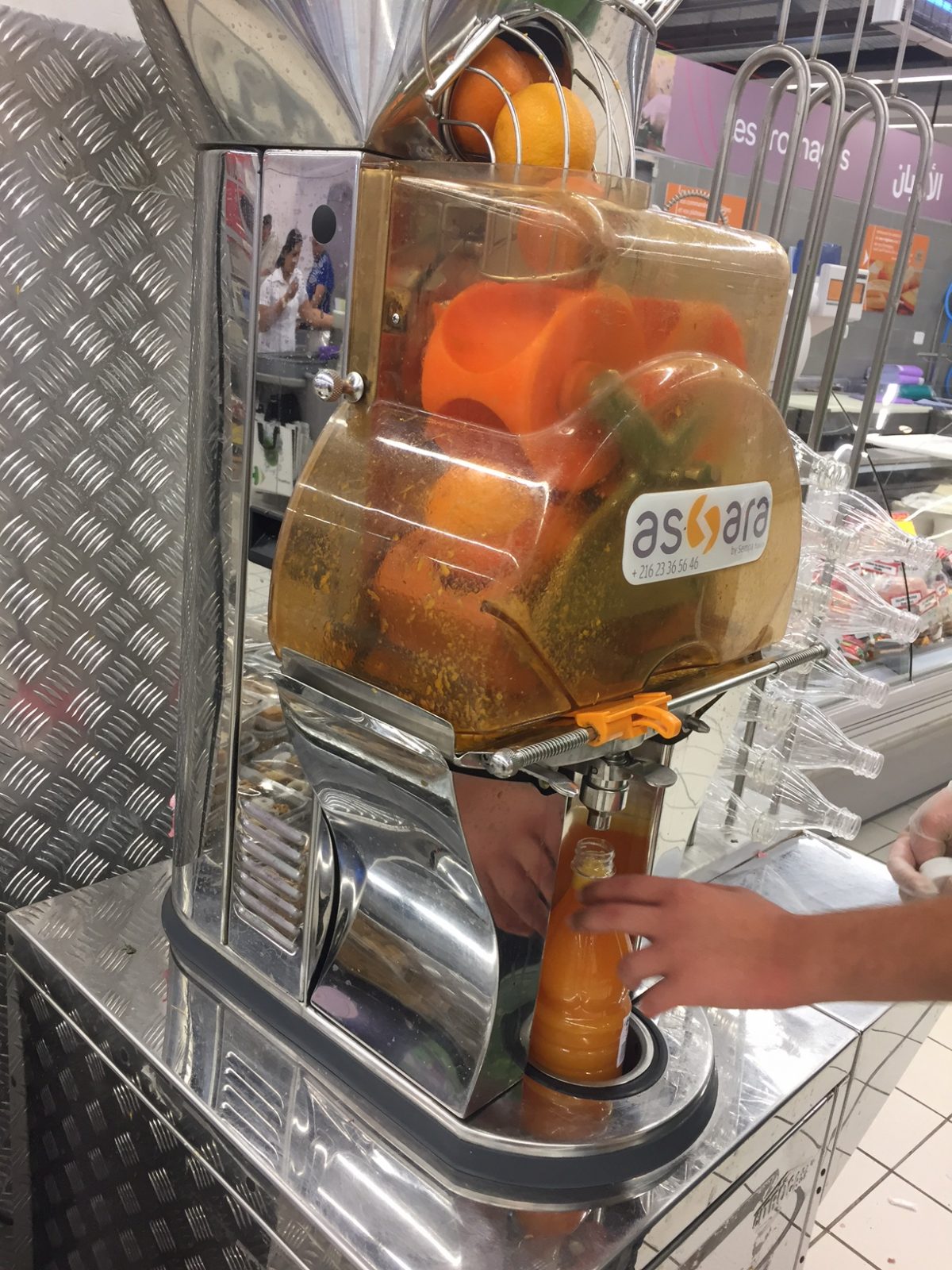