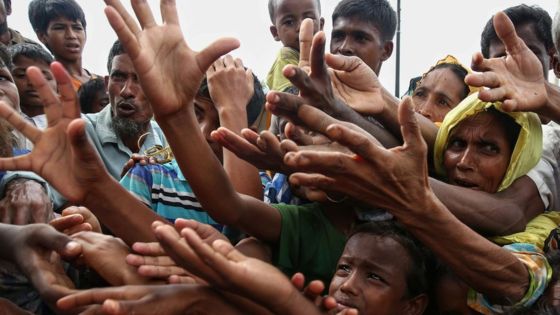 Only the short-sighted or the credulous would be persuaded by Aung San Suu Kyi’s extraordinary response to the Rohingya exodus from Myanmar.

Ms Suu Kyi, Myanmar’s State Counselor and de facto leader, said on Tuesday, that her country “does not fear international scrutiny”. She added that her democratically elected government was yet to find out “what the real problems are” in terms of the Rohingya exodus from the northern Rakhine state.

The words sounded strange. Either Ms Suu Kyi is at one remove from reality or she is willfully blind. She either does not see or she does not want to see. There can be only two explanations.

Nearly half the population of one state in Myanmar has left. It’s been described as the fastest, most concentrated refugee movement across an international border since 1994. It would be natural for Myanmar’s  de facto leader to know why and how.

Be that as it may, the Rohingya exodus – and the lack of regional sympathy, except for poor Bangladesh’s exemplary compassion – may come back to haunt South Asia. This is the moment when religious divides on the sub-continent may become vicious in a way that hasn’t happened since the 1947 partition of India and the founding of Pakistan.

Consider the prospects through the eyes of Bimal Ghosh, a former senior director of the United Nations, Emeritus Professor at Colombia’s Graduate School of Public Administration, and a Senior Fellow (global migration) at the Graduate Institute of International and Development Studies, Geneva. Professor Ghosh has expertise on issues related to globalization, migration, trade and development, human rights and security. The Professor offered this comment in a letter to the editor of the Financial Times. His letter is quoted verbatim.

It’s worth noting Bimal Ghosh’s reference to “the faith-related ethno-political configuration of the [South Asia] region” by which he means the Buddhist majorities of Myanmar, Thailand and Sri Lanka and the Muslim majorities of Bangladesh, Malaysia and Indonesia.

The FT deserves to be complimented for its coverage in the past few weeks of the Rohingya crisis in Myanmar (September 18). However, the discussion, though useful and stimulating, has so far shed little light on the wider perils lurking behind the recent events.

On August 25, militants led by the Arakan Rohingya Salvation Army (ARSA) attacked police and military posts in Rakhine state. Since then the spiral of violence unleashed by Myanmar army’s most brutal and indiscriminate assaults and the rapidly rising militancy among the Rohingyas hold the potential of an imminent twofold danger. First, there is a real risk that the unstable and tense situation in Rakhin state in Myanmar will drive ARSA, which already has links in Saudi Arabia and Pakistan (according to the International Crisis Group), to attract foreign fighters, including jihadis, to join the conflict. Fears of such links are apt to harden, in turn, the attitude of neighbouring countries towards the Rohingyas, as reflected in India’s decision to expel the Rohingya refugees already settled in that country.

Second, given the faith-related ethno-political configuration of the region — majorities in Myanmar, Thailand and Sri Lanka are Buddhists while those in Bangladesh, Malaysia and Indonesia are Muslims — any worsening of the Rohingya crisis could spark inter-faith tension and conflicts both between and within these countries.

If this happens, it could directly or indirectly suck into the conflict countries outside the region as well. There have already been a pro-Rohingya demonstration in Indonesia and visible uneasiness in a number of Muslim-majority countries. There is also no dearth of provocation to incite such faith-based violence. A sermon given in May 2015 by Abu Bakr al-Baghdadi, the Iraq leader of Isis, was reported as saying: “Where is the support of al-Salul [a derogatory expression for Saudi royals] and their allies for a million of the weak Muslims who are all without exception being exterminated in Burma?” If such incitement takes hold, it could make South and Southeast Asia a replica of the conflict-ridden countries in the Middle East and north Africa.