Those who wonder about the recent report on “Allah” embroidered onto Viking funeral clothes should read Michael Crichton’s novel ‘Eaters of the Dead’. The book’s title has a strapline ‘The Manuscript of Ibn Fadlan Relating His Experiences with the Northmen in AD 922 ‘. Later, Crichton’s novel was republished as The 13th Warrior to correspond with the film adaptation.

Crichton’s novel, written 41 years ago, is about a 10th-century Arab Muslim traveller who was despatched overseas by the Abbasid Caliph. The traveller, Ibn Fadlan, journeys with a group of Vikings to their settlement. As Crichton explains, the novel relies on a rather sketchy account by Ibn Fadlan of his journey north.

What the novel, but more to the point, Ibn Fadlan’s account per se reveals is the globalization of the 9th-century world.

It may have been different from today, but it existed.

Islam was not considered a hostile force but a curiosity, possibly even a  revolutionary and egalitarian model for society.

So to the investigation by textile archaeologist Annika Larsson of Uppsala University of the Viking funeral garments from 9th and 10th Century graves. Patterns woven with silk and silver thread spell the words “Allah” and “Ali”. Ms Larsson says they are in Kufic script, a geometric early style of Arabic.

Now, she says that some of those buried by the Vikings may have been Muslim. If so, it just shows the interconnectedness of our world.

Or else the reality that we all influence each other. 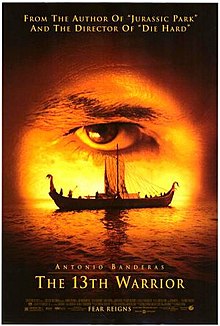