Does the clue to Priti Patel’s extraordinary actions on Israel lie in her surname?

A day before the forced resignation – sacking by another name – of Priti Patel, Britain’s secretary of international development, a white British man asked me if the cabinet minister’s background might offer any clues to her predicament.

He asked the question with some trepidation, possibly out of concern I might take it amiss. But it reflected a very genuine bewilderment that a senior British minister would secretly meet top-flight members of the Israeli government while holidaying in their country.

Ms Patel, it’s worth remembering, held multiple undisclosed meetings with Israel’s prime minister, several of his ministers and others, and neglected to mention the fact to her boss – UK prime minister Theresa May – or indeed to the British Foreign Office.

She even told her Israeli hosts that she would look into giving British taxpayers’ aid money to the Israeli military to treat wounded Syrian refugees in the Israeli-occupied Golan Heights region. The UK, incidentally, does not recognise Israel’s control of the Golan, seized from Syria 50 years ago.

My interlocutor said he was baffled. What, he wanted to know, could have made Ms Patel so sympathetic to Israel (and so dismissive of her own country’s norms of collective ministerial responsibility as well as its foreign policy positions).

I considered the question carefully. My interlocutor was erudite and enormously well-informed, a writer with perspicacity and an eye for detail. In his question lay the unspoken sub-text: Is it anything to do with Ms Patel’s Indian ethnicity that she is so supportive of Israel? Clearly, that was why he asked me.

I suggested that a clue to the conundrum may lie in Ms Patel’s surname. She belongs to the UK’s Gujarati diaspora, which was forced to leave Uganda by Idi Amin. Sections of the Indian diaspora and especially the Gujaratis take great pride in Indian prime minister Narendra Modi of the Hindu nationalist BJP. They are enthusiastic champions of the BJP and Mr Modi’s “Hindu pride” agenda. Many of them see Indian Muslims as a symbol of past ignominy, as descendants of invaders of pre-British India, repurposing temples and placing their own cultural stamp on the country. In post-Independence India, the narrative goes, Muslims are takers rather than makers, an irritant demanding equal consideration in a majority Hindu country.  Somewhat like Myanmar’s leader Aung San Suu Kyi, sections of the Indian diaspora see the “Muslim problem” worldwide as a threat that must  be forcefully repulsed. This provides a reason for many Indians – at home and overseas – to make common cause with the Jewish peoples, and more specifically with the state of Israel. Both India and Israel are threatened by Muslims, so the argument goes.

Indeed, the Indian often swells with pride when Hindus are likened to the Jews, which is to say, educated, enterprising and socially progressive.

Ms Patel, born in Britain after her family fled Uganda in the 1960s, has previously expressed open support for Israel. That is hardly a crime, and one might hope it is a nuanced view.

But her clandestine series of meetings and discussions suggest otherwise. That may have more to do with her background than anyone has been able to suggest without being shouted down for alleged bias against a woman of Indian ethnicity. 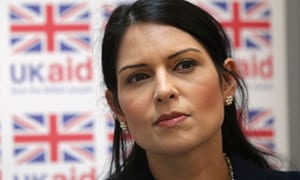