Is Europe joining the rest of the world in rejecting ‘Anglocondescension’?

Whatever your views on Glenn Greenwald, the journalist best known for his reporting on US-UK global surveillance (Edward #Snowden etc), his tweet from November 14 deserves a careful look.

Mr Greenwald wrote the following with respect to an opinion piece by Jonathan Powell on Britain’s growing international irrelevance : “This accurate observation, from a key Tony Blair aide, is presented as a tragedy. It’s actually a cause for celebration. British ‘influence’ has been devastating for most of the places it has graced.”

Few from Britain’s former colonies could disagree. I don’t. That said, irrelevance is dangerous if it leaves a void.

Even so, the international lip is curling right now at Britain and America’s ageing prima donna behaviour (“dotard” was the word North Korea’s Kim Jong Un used for Donald Trump).

Leonid Bershidsky, a Bloomberg View columnist who lives in Germany, believes that the blowback to Anglo-condescension is underway.  Mr Bershidsky recently wrote a very interesting column that pointed out Spain and Germany’s increasing impatience with the American and British presumption of moral superiority.

I recommend reading the column in full, if possible. But if not, here are some of Mr Bershidsky’s arguments.

The article challenges English-speaking pundits’ criticism of Madrid’s hard-line on Catalonia’s secession bid. It all but accuses the Anglophone pundits of hypocrisy, suggesting that Spain is criticized for defending its constitution “as they defend theirs (ferociously, in many cases, and if necessary invading other countries to do so).”

Interestingly, the article expresses resentment at the “racist” nature of the English-speaking world’s view of the Spanish. It mentions “the racist insistence in [sic] the temperamental character of the Spanish.”

Next up, the Germans:

A group of commentators has been arguing in the leading German newspaper Die Zeit that it’s time to look to a new world order, one that isn’t led by the US. A country like Germany, with its instinctive impulse to cooperation rather than domination, may be well-placed to help shape a new world order.

Once upon a time, he says, it was the Chinese and the Russians who spoke out against “Anglo-Saxon lecturing”. But now it’s emerging in some of Europe’s leading media outlets. He suggests it is a “sign that, after Brexit and Donald Trump’s victory, the English-speaking world is losing intellectual legitimacy.”

Decoded, that means the Europeans have little respect for a people idiotic enough to vote for economic disarray (Brexit) and political disaster (Trump).

And that’s why the Anglo-Saxon world’s intellectual leadership may be on the wane. 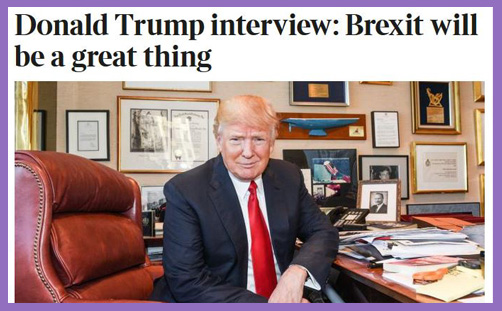