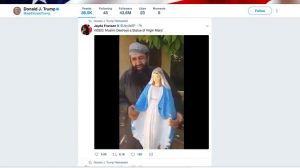 Some political events are volcanic; others are like a slow-burning fuse.

One of the three videos merits particular attention because it appears to assert the inherent incompatibility between Islam and Christianity.

The second of the video series tweeted by the Britain First group’s Jayda Fransen is frozen on the image of a heavyset man holding a demurely white-gowned, blue-cloaked statue. A single sentence, presumably appended by Fransen, offers a stark indication of the content: “Muslim Destroys a Statue of the Virgin Mary!” Even those who do not click to play the video will get the gut-wrenching message.

The New York Times, which examined the video, said it is 4 years old and the man is an extremist Syrian cleric, Abo Omar Ghabra.

Ghabra’s actions fit a pattern set by the Taliban’s dynamiting of the monumental Buddahs of Bamiyan in 2001 and other conspicuous attempts by Muslim extremist groups to destroy representational art.

The more dangerous message sought to be conveyed by the video and its wide dissemination by Trump is the implacable hostility between Islam and Christianity. The video is meant to intensify the struggle between the iconoclastic upstart faith founded by Prophet Mohammad in seventh-century Arabia and the older religion that shaped Western civilisation.

How? There is a great and terrible power in seeing a bearded, appar­ently Muslim man carelessly, even triumphantly smashing an icon of the Christian faith. It is even more disturbing that he is seen destroying a symbol of female virtue, an inspirational figure for Christians across the world.

Some might say the video and its retweeting are a slightly more spiritual version of the inflamma­tory cover featured by a mass-mar­ket, politically conservative Polish magazine in February 2016. That didn’t get as much attention or traction as this video. (Trump didn’t retweet it and he was still consid­ered a bizarre, improbable presiden­tial candidate.)

Even so, as this columnist noted in this newspaper at the time, the wSieci magazine cover sent a dangerous and powerful message at the height of European concerns over the influx of Muslim refugee men. It bore the words “The Islamic Rape of Europe” and showed a white woman wrapped in the European Union’s blue flag, her mouth open in a Munch-like scream while three pairs of dark-skinned male hands pull at her hair, clothes, waist and arms.

Both the magazine and the retweeted video have the same subtext: the threat of Muslim sexual dominance over the Christian West. But Trump’s second retweeted video also taps into something else. It reinforces the expectation of a decisive coming struggle between Islam and Christianity.

Trump’s former chief strategist at the White House, Stephen Bannon, is known to think along these lines. In 2014, he delivered a Skype address to a Vatican conference hosted by conservative Catholic group the Institute for Human Dignity. He declared that the impending conflict needed all Christians to join together as a new “church militant.” That was the only way, Bannon said, to “fight for our beliefs against this new barbarity that’s starting.”

The video retweeted by Trump is supposed to illustrate that “barbar­ity.” For, to smash a statue revered by another elicits a visceral reaction.

The retweeted video certainly does convey a dangerous threat, albeit at the level of a provincial cleric in northern Syria. The video tries to portray such behaviour as an article of the Islamic faith when it is anything but. Practices such as Ghabra’s are not condoned by stories about the Prophet’s own actions.

When he entered the pre-Islamic pagan shrine Kaaba in Mecca, the Prophet is said to have destroyed all the images of gods but allowed a painting of the Virgin and infant Jesus to remain. There are varying accounts of how he protected that painting. Some say he covered it with his hands; others that he directed it to be left intact.

The painting perished when a fire destroyed the building in 683, barely half a century after it was saved.

That story offers not just a wholesome but a holistic perspec­tive of the Muslim faith’s approach to other people’s icons.