Courage is fire, bullying is smoke. Disraeli is apt for Trump’s behaviour at UN 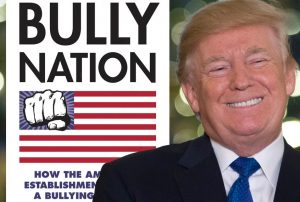 You know what they say about bullying. Courage is fire, and bullying is smoke.

From New York, Mr Trump’s envoy to the United Nations, blustered and bullied.

Nikki Haley’s various statements would not have been out of place issuing from the mouth of a mafia boss.

(Or rather, the assistant to the boss. The one who stands behind Donny DiTrumpo and looks daggers at you, then lets you hear their muttered words to the beefy chap near the exit: “I want this guy dead! I want his family dead! I want his house burned to the ground! I want to go there in the middle of the night and piss on his ashes!”)

Anyway, so Mr Trump (aka, president of the United States) and Ms Haley (US ambassador to the United Nations) bullied and bullied.

And what was the result?

Three of the four largest recipients of US assistance voted against Donald Trump’s Jerusalem decision.

Three out of four! Imagine that.

Afghanistan, Iraq and Egypt, all of which receive huge amounts of American assistance, backed the UN General Assembly resolution that effectively called on the US to withdraw its recognition of Jerusalem as the capital of Israel.

Pakistan, which gets a great deal of US assistance, insisted on being a co-sponsor. In fact, the list of co-sponsors grew at the last minute to include Egypt and Jordan, the only two countries besides Israel that receive more than $1 billion in U.S. aid.

“Take that, Donald Trump,” all of these countries seemed to be saying. “Now, do your worst.”

What’s the worst that Mr Trump can do, after all his bullying talk?

He could make a feint at military aid to Egypt, but only for a short time. US funding has made up around 20-25 per cent of Egypt’s military budget in recent years, according to statistics from the International Institute for Strategic Studies. A portion of the aid is already suspended over human rights concerns and Trump’s America could delay plans to resume it next year. But it’s unlikely that he would simply cut off aid to Egypt’s military – that would be a problem for Israel – and Cairo remains key to US security interests in the region.

Same for Iraq, for Ukraine and for Pakistan. The US helps them militarily because it suits the US to do so, not because they love America or because America loves them.

Back then to Disraeli’s perspicacious comment 150 years before Mr Trump’s bullying and hectoring: Courage is fire, and bullying is smoke.