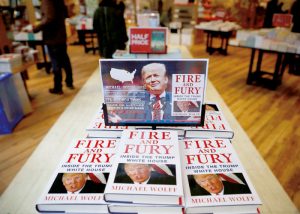 For a US administration that promised to bring about peace in the Middle East, Donald Trump’s White House team seemed to men­tion the region hardly at all in the first eight months in office.

In Michael Wolff’s gossipy block­buster “Fire and Fury,” which pur­ports to document most of the first year of the Trump White House, there are just four references to the Middle East per se. Most of them revolve around the region’s status as an unsolvable challenge, one that would defy anyone, not just the US president’s son-in-law Jared Kushner.

As the book tells it, the task given to Kushner, a political green­horn, was seen as a bit of a joke. Wolff describes Fox News com­mentator Tucker Carlson laugh­ingly telling Trump “he hadn’t really done Kushner any favours” by giving him such a portfolio. ‘I know,’ replied Trump, quite enjoy­ing the joke.”

Then there was Trump’s former chief strategist, the fearsomely well-read believer in the culture wars, Stephen Bannon. Wolff said Kushner’s efforts towards what Trump flamboyantly called “the ultimate deal” were constantly de­rided by Bannon. Wolff writes that Bannon would often say of Kush­ner, “his voice reverent and his expression deadpan, ‘He’s going to make peace in the Middle East.’” It caused other White House aides to crack up.

Make what you want of the gos­sip proffered by Wolff (or the value of gossip as a general currency of social exchange) but one thing comes through pretty clearly. The Trump administration does seem to have been alternately pompous and unserious about the Palestini­an-Israeli issue.

If, as the saying goes, one half of a rumour is true though it may not be clear which half, the anecdotes served up by Wolff indicate many things. The Trump White House did want to make peace between the Palestinians and the Israelis but knew little about the process and cared even less about the people involved. Many of Trump’s aides considered the overweening arrogance of the ambition laugh­able. Until the autumn, those aides found little reason to revise their opinion.

There are differing views about the value of gossip. Some say it’s nasty, hurtful and a dangerous tool wielded by the mendacious. It’s also been called “nature’s tel­ephone.” Liz Smith, America’s god­dess of gossip, who died last year, memorably described her stock-in-trade as “news running ahead of itself in a red satin dress.”

Smith, it’s worth noting, wrote copiously about Trump’s rather scandalous divorce from his first wife based on her exclusive 1991 interviews with Ivana Trump. Was that dirt served up on a gold-edged plate or the real deal? Is Wolff’s book, which became a bestseller within hours of publication, basi­cally discredited by its generally gossipy tone?

There is one solid fact in favour of Wolff’s offering. It reads no differently from the torrent of newspaper and magazine reports and analyses in the past year about the Trump administration’s rather simplistic view of the Middle East in general and of Saudi Arabia, Egypt and Israel in particular.

As Trump marks his first year in the White House, it’s hard to argue that his administration was push­ing for a just peace in the region. It’s hard to make the case that Trump (or Kushner) understood the effect of occupation on mil­lions of Palestinians.

A month before Wolff’s book was published, Trump announced the United States would hence­forth regard Jerusalem as the capital of Israel. Within a fortnight of the book’s dizzying rise to the top of sales charts, the United States declared it would withhold more than half of the $125 million it gives to the UN relief agency for the Palestinians. To penalise a suffering people for refusing to meekly swallow further injustice is a tragedy.

There is gossip and then there is the evidence of what we see and hear. The real fire and fury may be only just starting.