How old would little Emma really be? Born in Nov, she was conceived in 1992 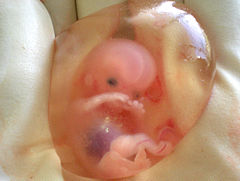 How old would little Emma really be? Born last month, she was conceived in 1992.

Little Emma developed from the oldest known embryo to result in a successful birth. The embryo was conceived and cryogenically frozen in 1992. When little Emma was born on November 25, 2017 she might technically be regarded as nearly as old as her 26-year-old mother?

It depends upon where one stands on the question “When do human beings begin?”

As has often been said, human embryologists would answer rather differently (and a great deal more believably) than philosophers, politicians, theologians, bioethicists, movie stars and others.

As has also been frequently pointed out, the question as to when a human person begins is a philosophical one.

Is it in the twinkle in the eye?

The joining of sperm and egg?

Is little Emma not as old then as her anonymous biological parents’ attempts to undergo in-vitro fertilization and opt for cryogenic storage of their extraneous embryos?

Is she just a few weeks’ old baby, not a 25-year-old human being?

Back in 1999, an article by Dr Dianne N. Irving, a philosophy professor who has represented the Catholic Medical Association of the United States, wrote an interesting and fairly persuasive piece in the International Journal of Sociology and Social Policy.

“…scientifically something very radical occurs between the processes of gametogenesis and fertilization, the change from a simple part of one human being (i.e., a sperm) and a simple part of another human being (i.e., an oocyte, usually referred to as an “ovum” or “egg”), which simply possess “human life”, to a new, genetically unique, newly existing, individual, whole living human being (a single-cell embryonic human zygote). That is, upon fertilization, parts of human beings have actually been transformed into something very different from what they were before; they have been changed into a single, whole human being.”

Going by that explanation (whatever be the guidance provided by faith to Dr Irving, she has apparently been rather diligent about researching issues concerning the early human embryo) there is only one possible conclusion.

Little Emma became a single, whole human being in 1992.

Only to be born 25 years later!