Another lens to view Syria: its merchants 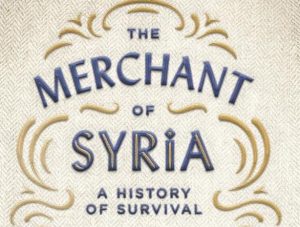 Towards the end of her book “The Merchant of Syria: A History of Survival,” British Arabist Diana Darke quotes a Syrian proverb. “All roads lead to the mill” it goes, a reference to the Syrian people’s indomitable instinct for survival through commerce over hundreds of years.

It may seem like an uncomfortably Panglossian sentiment when the bloody, long-running civil war has metastasised into a wider Syria war, one that has drawn in foreign armies, triggered fears of devastating great power rivalry and left Syrians with little control of their own destiny.

But Darke, who has known Syria since the 1970s and lived there, bought and restored an old house in Damascus, is not being overly sentimental about Syrians’ capacity to survive. She grounds the book in Syria’s socio-economic history — its people’s talent for trade and entrepreneurship and their manifest ability to construct a “mosaic society… (of) Sunni and Shia Muslims, Alawis, Druze, Orthodox and Catholic Christians, Syriacs, Armenians, Kurds, Turkmens, Circassians, Ismailis and, historically, Jews…”

She splices the story of Syria with that of one man, the merchant of the title, to illustrate the grittiness that marks out the Syrian people. Every other chapter of the book recounts the life and times of the late Mohammad Chaker Chamsi-Pasha, known as Abu Chaker.

He was from Homs and was born in 1921, nine years before Syria’s long-serving Ba’athist dictator Hafez Assad. Abu Chaker dealt in textiles, lost everything twice over, Darke writes, “through political instability and war” but went on to take over (and save) Hield, a famous wool manufacturer in Bradford in Britain.

Eventually, he returned to Homs, leaving his city for the last time in 2011, a couple of years before he died. Towards the end of his life, he watched the conflict raging in his country from afar. Darke describes Abu Chaker as “the archetypal Syrian merchant” and examines his stubborn refusal to give up for clues to the future of war-torn Syria.

In the book, she seems to come away from that particular exercise hopeful, not sanguine. In e-mailed responses to questions from The Arab Weekly, Darke is more upbeat. “Given its history, Syria will survive thanks to its people and their resilience,” she said. “Based on my researches and my experience of how Syrian society is still holding together. It is damaged, bruised and battered but not irreparably,” Darke said.

The book acknowledges that Syria faces a situation much different from the turmoil of its recent past — the capricious and self-serving carve-up of Greater Syria by the French; the fall of the Ottoman Empire; or, further back, the events of 1860 that are often called a civil war.

The “complicating factor” in Syria, Darke writes, is the rise of Islamist extremist organisations. The ideology “will continue to find fertile breeding ground among a brutalised and unemployed youth who have nothing to lose.”

As long as wealthy Syrian elites refuse to share opportunity and good fortune with the disadvantaged underclass, she writes, “even moderate Muslims may be driven to join the ranks of the extremists.” It is in such dispiriting conditions, she argues, that the role of the Syrian merchant, especially with the ingenuity of resourceful, determined Abu Chaker “will continue to be pivotal.”

Darke’s book adds to a lengthening list of memoirs, novels and non-fiction on Syria. There is Rana Haddad’s novel, “The Unexpected Love Objects of Dunya Noor.” Chemical attack-survivor Kassem Eid’s “My Country: A Syrian Memoir” is due out next month.

Journalist Rania Abouzeid’s “No Turning Back: Life, Loss, and Hope in Wartime Syria” was published in March. It tracked the trajectory of the Syrian uprising through the eyes of a handful of characters.

Last year, there was “The Home That Was our Country: A Memoir of Syria,” in which Alia Malek recounted her return from the United States to Damascus to reclaim her grandmother’s apartment. In their 2016 book, “Burning Country: Syrians in Revolution and War,” Robin Yassin-Kassab and Leila al-Shami offered a people’s history of the uprising.

The many genres that are being used to tell Syria’s story underline its complexity. Darke’s book offers a different lens to view a country that is all too often seen as no more than a long-running war, a constant flow of refugees or a bad news story that never ends.