I sit in a troglodyte structure to write this. It is a dwelling typical of Matmata and because it is 20 feet below ground, there is no connection with the world beyond this part of south-eastern Tunisia. No connection other than the memory of having come through Tamezret and Douz and beyond that, through Kebili and the dry great salt lake of Chott el Jerid. I will post this online when I leave Matmata.

Here, you know there is a world beyond because you came through it, in order to get here.

But what if you were Matmatan and were living here 600 years ago? What would it have been like?

We can only imagine and not know.

But there is some indication of what a different world this was, even half-a-century ago, from a photo that’s up in the lobby of the Sidi Driss hotel here. The hotel is famous for playing a role in Star Wars: The Phantom Menace. Crowds of Star Wars fans visit every year. It’s doubtful they pay much attention to that photo in Sidi Driss hotel, but it speaks volumes about the uniqueness of Matmata.

It is an aerial photo taken in 1968 and shows a village with nothing but giant pockmarks (and just two or three buildings). The holes in the ground are troglodyte structures – not caves exactly, but earth that has been removed to form a large round courtyard possibly 30 feet across.

Today, Matmata has a few more buildings above ground than the 1968 photograph reveals. It has a bank, post office, secondary school, two mini-marts and 300 modern houses. All of these were added since the late 1960s, after a disaster the locals call “the great rain”. So, now these buildings share the city space above ground with the existing primary school, National Guard post and now-closed court house. (There is also a military base in the hills and it’s been there since much before the 1960s).

But the locals’ heart is still in their traditional troglodyte way of life. In the typical Matmatan house, the courtyard would have a well to collect rainwater. Off the courtyard, rooms would be built into the circular walls of the dwelling. And that’s how they lived and still live. Roughly 200 families still live in troglodyte dwellings in Matmata. Often, they have a modern house too that connects to their old troglodyte one. As Khaled Azzouni, a Matmatan who lives that way with his family says of the affinity with the old troglodyte house, “as we say in Matmata, it needs the breath of the human being to stay alive. If we leave, it will fall.”

It’s easy to see why. The clay erodes constantly and a troglodyte structure needs unceasing maintenance to stay in business.

The troglodyte house we’re in is a place that takes paying guests – the Trait d’Union in Tijman, a Matmata suburb. The concept of a troglodyte B&B was created by Frenchman Patrick Bonel to symbolize the joining of Europe and Africa, the Mediterranean and the Sahara and the mountains and the sea. It’s managed by Habib, who once lived in a troglodyte house in Hadagh village. In the Trait d’Union, we can see the way the mud from some rainy day or night has streaked the lime plaster, which is eight feet high in the courtyard.

A patch of the limed ceiling in our well-appointed room has fallen off. A troglodyte house seems to need a lot of work. How do you manage, I asked Mr Bonel. 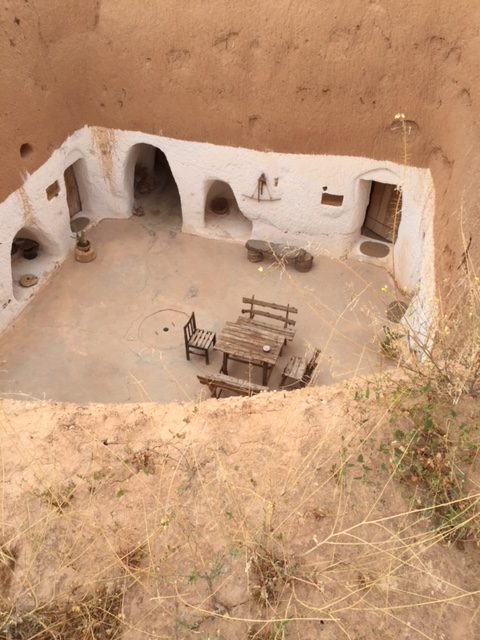