A distinctly European sensibility in a Tunisian troglodyte house

We walk into the Trait d’Union, Tijma, Matmata in distant south-eastern Tunisia. The Libyan border is about 150 km away.

Trait d’Union is a 350-year-old troglodyte house that now takes in paying visitors. Seven generations of one troglodyte family lived there from the early 1600s. In 1967, after the natural disaster that locals call “the great rain”, the family left for mod-cons and newly-built houses. The house came to life again only in 2010, when it was restored and opened to paying guests.

I walk into the house dug out of the ground, roughly 14 metres below the level at which we would normally stand, walk or build, and I’m surprised. It is remarkably clean (considering the walls are unplastered earth). It is very orderly, has no plastic tat and boasts several innovative organic touches. For instance, next to the WC, there’s a wooden block with a branch wedged in like a gearshift and that’s a toilet roll holder. The rooms are tastefully and artistically arranged – traditional baskets are scattered around; part of a traditional door leans on a wall – an unusual artwork; the lampshades seemed to be made of woven palm leaves or jerid.

Sidi Driss, I have to say, was rather grubby; a sense of entitled decay hangs heavy over it. The rooms are dark and badly appointed. Tuhami Jemni, who owns Sidi Driss, got the idea for a troglodyte hotel in Matmata after the “great rain”. Then, he struck gold with the Star Wars role (courtesy George Lucas’s Tunisian friend and colleague Tarek Ben Ammar). But now, the Star Wars hotel appears best experienced on film.

Back at Trait d’Union, the reason for the contrast with Sidi Driss seems to suddenly become clear. At dinner, I meet Patrick Bonel, a Frenchman from Fountainbleau, who made it his life’s work to preserve a troglodyte house and tell the troglodyte story to visitors of many ethnicities and from different lands. Mr Bonel, it turns out, restored the troglodyte structure himself, working on his own and only occasionally with a team.

It took Mr Bonel a year and because he could not find the power tools he needed, he did the work by hand, slowly and laboriously concealing the electricity cables, putting in a modern kitchen and six individual bathrooms each labeled by the guest room with which it is paired. The bathrooms are not en-suite and not strictly within the troglodyte house (they are on level 1, and guests need to cross the courtyard and climb a few stairs to get to the loo). The reason the bathrooms are kept as far away as possible from the actual troglodyte house is because a leak would be a catastrophe in a mud structure.

Mr Bonel says he has happily lived 11 years in his underground house. “It is good for the health. And very peaceful.”

In the process, he has created a simply unforgettable experience.

(N.B.: No hospitality was sought or received). 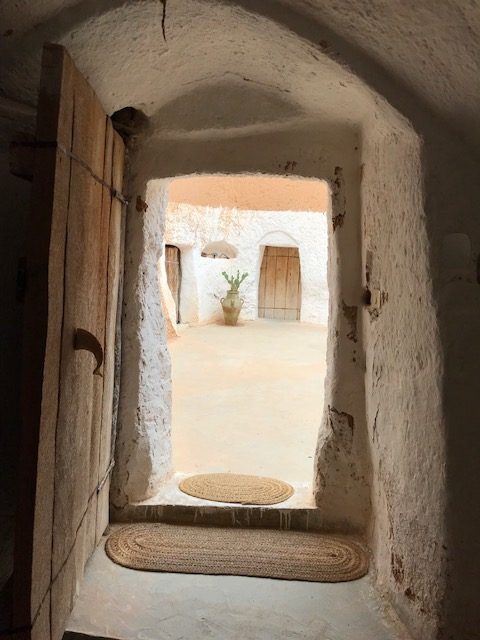