Visiting the Ben Nasrs in their troglodyte house, Matmata, Tunisia

We turn up at the Ben Nasrs’ family home in western Matmata. Here’s a handy landmark, we’re told, to find the house. Two round domes, denoting the tombs of marabouts or holy men, stand in the hills almost exactly in front of the house. (I’m not sure that’s enough to get me there!)

The Ben Nasrs are part of a five-strong cluster of troglodyte homes in that part of Matmata. Their house is too far away from the centre of Matmata to be easily hooked up to the electrical grid. So, the Ben Nasr house boasts solar panels, gifted to them in 2014 by the authorities in an election bonanza. The Ben Nasrs are one of four or five Matmata families to have been so privileged. Electoral democracy has its manifest benefits for people like the Ben Nasrs. It’s something Tunisia didn’t experience until after it overthrew the dictator, Zinedine Ben Ali.

The Ben Nasrs also have the first troglodyte house that actively solicits visitors, who pay what they deem the experience to have been worth. (5 dinars or $2 is fine).

Apparently Nejet, the matriarch of the family, is responsible for this innovation. She arrived at the idea by listening to some of the things said by her son Hakim, a waiter in a hotel. It was 2012, the year after Tunisia’s revolution. Ben Ali was gone, the future had previously unimaginable possibilities and Nejet decided to open up her house to visitors.

We visited six years later, and found it utterly charming. Just like other troglodyte houses, it sits 20 feet below ground, a huge circle dug out of the earth. Interestingly, it has two storeys. 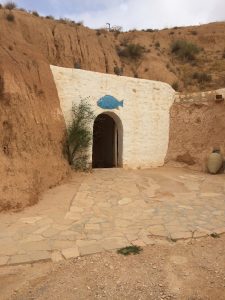 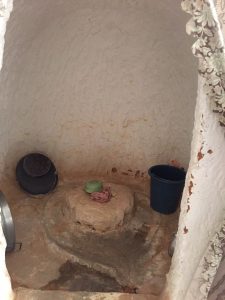 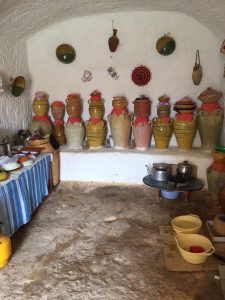 The large blue fish over the lime-washed front entrance is meant to keep away the evil eye.

The corridor leading into the courtyard has a deep shelf with neatly-arranged agricultural tools. It is reminiscent of a corridor-tidy (with a bowl for car keys and suchlike) in any urban house anywhere. The Ben Nasr’s corridor tidy has a plough, a harrow and other farm tools. Further in, the corridor widens into a room where stands a carpet loom. Nejet works at it most mornings.

The family has an old-fashioned grinding stone (it’s called a raha), which they use every day to make bread.

There is an en-suite bathing area of sorts in the room shared by Nejet and her husband Kilani (a baker in Nouvelle Matmata, 15 km from the original troglodyte village). When I say of sorts, I mean exactly that. A kneeling bather, ensconced in a narrow stone channel in the floor, can carefully sluice his or her body with small amounts of water. It runs down the channel and into a jar sunk into the floor. The jar is emptied after use.

This is an innovation for a troglodyte house. Traditionally, there is no bathroom or toilet in the structure for fear a leak could seep into the mud and lead the house to collapse.

The kitchen is neat and pretty functional. There is no running water and they bring it in from the well outside.

We are initially shepherded around the house by Sabarin, the third daughter (and fourth child) of this family of six children. Sabarin, 27, is set to marry after Ramadan. This means that by end-June, Sabarin should be out of Matmata and the troglodyte house where she has lived her whole life.

“No,” she says emphatically and laughs. Her fiancée is from Kebili, the big city a couple hours away. Sabarin is keen to live in a modern house.

“How do you feel about that?” I ask her mother, Nejet.

Her softly wrinkled face is stoic. “She must marry and have her own life,” she replies. “I already have two married daughters who live in modern houses in Madiha and Matmata.” As for her only son, Hakim, he too lives in a modern house in Matmata.

“What about you then?” I persist. “Why do you stay on in this underground house?”

She shrugs. “I want to. I’ve lived in a house like this all my life.” Nejet’s childhood home, barely a kilometer away, is underground too. “It’s cooler, simple, clean,” she adds. “That’s important for the body to have this when one sleeps.” 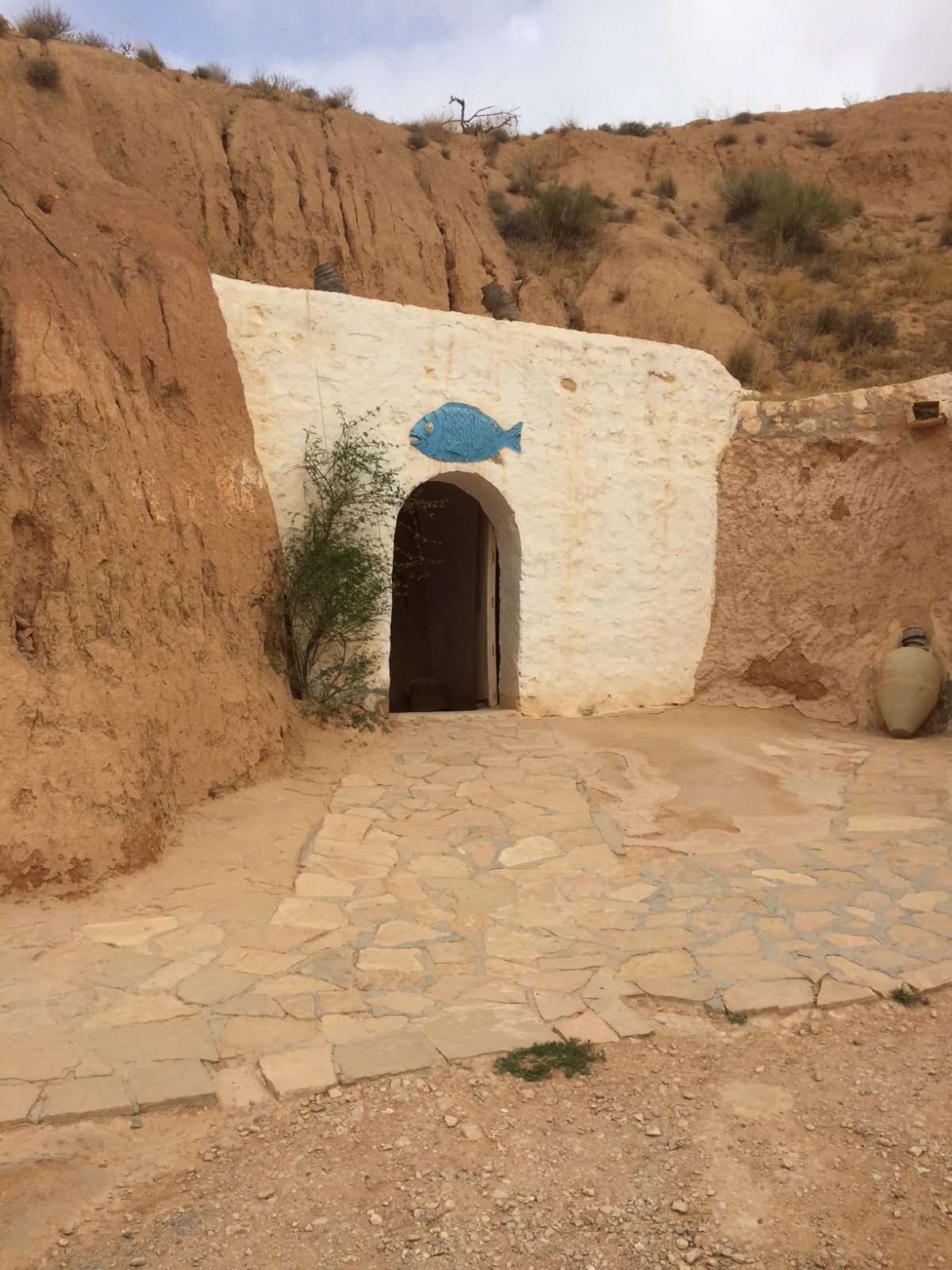