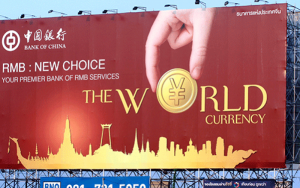 After the “tweet bomb”, as Drudge called it, thrown by Donald Trump at his Iranian counterpart Hassan Rouhani, many Iranians in Iran bravely said everything would be fine.

And yet, the one thing even the most optimistic cannot deny is the great power that accrues to America because the dollar is the world’s reserve currency.

Can that change any time soon?

Can China’s renminbi challenge the dollar as the world’s default currency?

First, let’s consider what’s happened on that front and then, what should happen. I’m basing most of my information on a piece co-written in April for Brookings by the aptly named David Dollar. He was formerly (2010-2013) the US Treasury’s economic and financial emissary to China and was based in Beijing.

At least part of this made a lot of sense. Last year, China overtook the US as the world’s largest crude oil importer. If you buy the most of any one product sold by a group of businessmen, I suppose you can suggest how you want to pay for it.

Except that China can’t really and Middle Eastern oil producers aren’t likely to be overly receptive anyway. Here’s why.

So now that the Chinese are buying the most crude, shouldn’t oil producing countries – and other people buying and selling anything anywhere else in the world – pay more heed to the RMB?

Yes, but only if they know for sure that they’ll be buying a lot from China right away. If not, why hold a lot of RMB rather than the dollar or some other hard currency, which can be used anywhere or sold back or whatever?

As Mr Dollar (not Donald Trump, just the Brookings’ analyst) writes: “China’s capital markets are under-developed and the ability to switch among currencies is restricted. In order to make its currency attractive for payments, China will need to liberalize its financial markets and its capital account. In practice this means allowing foreigners to easily buy Chinese stocks and bonds and to move money in and out of the country as needed.”

Sanctions against Iran and such like might make it useful to transact in RMB sometimes. But as Mr Dollar (of Brookings) says, it’s only a “specialized group” of countries that would find the RMB helpful.

On a lighter note, it’s hard to see the RMB giving the dollar a run for its money any time soon considering few outside China are really sure if the currency is renminbi or yuan.

(Both it seems. Renminbi is the official name of the currency introduced by the Communist People’s Republic of China when it was founded in 1949. Yuan is a unit of the renminbi).