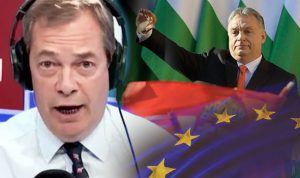 What gives Hungary the right – or responsibility – to lead the West?

Nothing very much really. Okay, it’s GDP is growing a bit faster than the rest of Europe but it started from a low base.

Even so, Prime Minister Viktor Orban seems greatly burdened by a sense of profound self-belief. Does he think he is a Christian Saladin? Mr Orban certainly seems to regard it as a duty to save the white Christian world from secularism, good thoughts and brotherly love.

Just days ago, Mr Orban urged his right-wing comrades across Europe to “concentrate all our strength” on “important and decisive” 2019 elections for the European Parliament. What was at stake, he said, is killing off the values of “1968” and those who ran for office on those principles.

Decoded, that means he wants to end European liberal politics, which takes as its lodestar human rights, the rule of law and open, inclusive societies. “Next May we can wave goodbye not only to liberal democracy … but also to the entire elite of ’68,” Mr Orban said.

Who’s listening to Mr Orban is an interesting question. Not just Steve Bannon, Donald Trump’s former advisor. But in the UK, the far-right is inviting Hungarian and Polish speakers over to brainstorm. An alt-European Union of sorts is coming into being with Mr Orban as prophet and president.