Trump America’s new game on trade is ‘Risk’ without rules 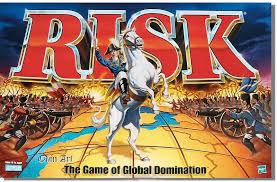 The world is beginning to understand the new economic “game” being played by Trump’s America, according to the always perceptive Mohamed A. El-Erian. The game is basically about two moves – a willingness to accept any level of risk including grave economic damage, and a streetfighter’s refusal to consider rules.

That is well-put, if a little too measured. The Trump administration is a bully, working off America’s great economic and military power to threaten every other child on the playground to hand over its sweeties (or its tiffin box).

Anyway, who are we lay commentators to judge? Mr El-Erian is chief economic adviser at Allianz SE, the European financial services company. His job leaves him well placed to take an overview, albeit with enough granularity to provide some useful insights.

So, what is there to say about the new world trade rules coming into focus?

That Mr Trump’s preliminary trade agreement with Mexico somewhat lessens the prospect of a global trade war and if Canada plays along, a united North American approach to China becomes more possible. And if Europe caves in too, US dominance will be complete and yet again, a united western front against China may become possible.

Even a lay commentator might reasonably question some of this because

It may take a long time for the trade ructions to be worked out.