The Saudi paradox: Hollywood-watching millennials a world apart from the world

Here’s a snapshot of Saudis who support Crown Prince Mohammed Bin Salman: “young and urban, the kind of people who represent the core of support for Mohammed’s Vision 2030 program of social and economic restructuring, which has included allowing women to drive for the first time, introducing cinemas and other entertainment, and creating more jobs. Their voices are significant in a nation where 60 percent of the population is under 30.”

The reportage comes more than a fortnight after growing international interest (and horror) over the death of Jamal Khashoggi at the Saudi consulate in Istanbul. The report quotes a 16-year-old girl who venerates the Crown Prince. He has, after all, made it possible for her to not have to literally leave the country just to see a Hollywood film in a theatre. The report also quotes Saudi men in their 30s and 40s. They employ scrupulous judicial impartiality with respect to Mohammed Bin Salman. “Who am I to judge?” one man responds to questions about the future king’s alleged behaviour and mindset. “I like him. He’s young. He understands our needs. He’s made good things for all of us in Saudi Arabia.”

Only one man in the report – Abdullah, 40, who declined to give his last name – was critical of the Crown Prince, and that too rather mildly. And he prudently refused to talk about the Khashoggi case, saying he was not really familiar with the details.

The Saudis who appreciate the Crown Prince are MBS’s constituency. They are his base and as solidly allied with MBS as is Donald Trump’s base.

Those young urban Saudis want the apparent freedoms MBS has allowed – cinemas and so on and for women to drive. With those new freedoms urban young Saudis feel they can live in a way that’s less cut off from the rest of the world. But are they really?

Apart from the fact that MBS has cracked down on dissent and criticism, urban young Saudis wouldn’t disapprove of their future king without solid evidence of his alleged misdeeds. But definitive evidence will probably never be available. Even if there were, news of it would probably not be allowed to penetrate the kingdom. And even if whispers did filter into the kingdom, the Crown Prince’s base would probably not believe it.

As with the Fox news bubble in the United States, so with the Saudi shield against unpleasant information.

Mr Trump’s supporters believe whatever he says, even using the same words as the president to describe events, no matter how false or inaccurate. The Saudi shield provides protection to the kingdom’s ruling faction. Being an absolute monarchy helps.

The paradox of Saudi Arabia is that the Crown Prince’s only possible opponents are people wholly foreign to non-Saudi observers. They are the religious conservatives and rural people. Kevin Sullivan quotes an unnamed western diplomat with long experience in Saudi Arabia as follows:

The only Saudis who are likely to disapprove of the Crown Prince would be the ones who “tend not to come out for Häagen Dazs and dishes of sweet edamame at a Hollywood movie on a Saturday afternoon”. 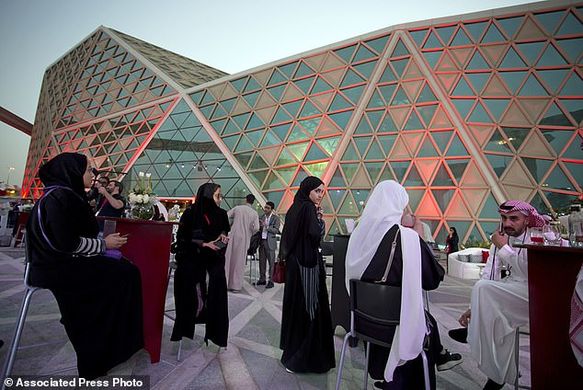