Iraq wants the Americans out. Yet again.

The Iraqis want Americans troops out. Yet again.

In 2018, Iraqi parliamentarians are demanding US troops leave the country because of the insulting way President Donald Trump flew in and out of Iraq without bothering to meet any Iraqi officials.

Mr Trump’s three-hour sojourn in Iraq was at Asad Air Base, some 115 miles northwest of Baghdad.

Hamdillah Kaabi, spokesman for nationalist Shiite Muslim cleric Muqtada Sadr’s Sairoon party, said Mr Trump’s visit confirmed US disregard for other nations’ sovereignty. Opinions offered by Sairoon’s spokesman matter. Sadr leads the largest bloc in the Iraqi parliament, having campaigned in this year’s elections to limit the influence of both Washington and Tehran in Iraq’s affairs. Mr Kaabi added that his party had long sought to end Washington’s “arrogance and disrespect” in its dealings with Iraq.

What the Iraqis seem to have found particularly disrespectful was the take-it-or-leave-it two hours notice Prime Minister Adel Abdul Mahdi was given to meet President Trump.

But former Prime Minister Haider Abadi, who once worked closely with the US-led coalition against ISIS, was scathing about the “method of Trump’s visit”, which he described as “not appropriate to diplomatic mores and to relations with sovereign states.”

For now, Mr Mahdi’s office has opted for a delicate statement on apparent American high-handedness. It said that due to “differences in the points of view on arranging the meeting,” Mr Mahdi and Mr Trump instead talked by phone and discussed “developments after the US president’s decision to withdraw from Syria.”

There are signs the sense of slight won’t go away any time soon. Qais Khazali, head of the Asaib Ahl Haq militia, tweeted praise for the Iraqi Prime Minister’s refusal to meet Mr Trump at short notice. And he suggested that “Iraq’s response will be with a parliamentary decision to expel [Trump’s] military forces.” It’s worth noting that Mr Khazali’s militia is backed by Iran but recently fought in concert with the US-led coalition against ISIS.

The anger seems genuine and widespread. Muntadhar Zaidi, an Iraqi journalist turned politician who once hurled his shoes at then-President George W. Bush when he was visiting Iraq in 2008, tweeted about Iraq’s surrender to the US: “Trump visited Iraq without your knowledge, without giving you attention, and without asking you to give him permission. What sovereignty are you taking after this?” 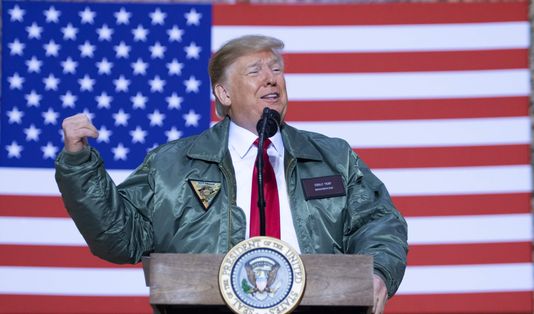