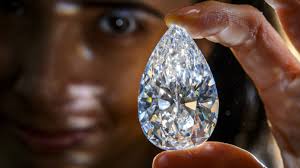 As an indefatigable good news prospector, I offer you this nugget: Angola is auctioning a diamond and everyone, including Angolans, knows what’s going on.

This is huge. Not the diamond, which at 144 carats is not the biggest in the world or notable in any way other than the fact that its sale is public.

It is huge because this is Angola’s first diamond auction. Bear in mind, this country rich in mineral and petroleum reserves won independence from Portugal in 1975. That Angola is only now – in 2019 – inviting around 35 companies to bid for seven stones should not be the reason for head-shaking so much as a thumbs-up.

To the positive force of political change.

Angola, the world’s fifth largest producer of diamonds, is moving to make the sector more lucrative for producers and the state. For its people, who have for decades been desperately poor, with a low standard of living, life expectancy rates that are among the lowest in the world, and with one of the highest rates of infant mortality.

So what happened to bring about a diamond auction, Angola’s first?

Put it down to the unintended consequences of change. When Angola’s ruler of 38 years, José Eduardo dos Santos, stepped down (unwillingly) in 2017, he picked a supposedly pliant successor. But João Manuel Gonçalves Lourenço, now president, was anything but. He has been slowly and determinedly cleaning the stables, tamping down on the power of the dos Santos family and now, comes this: the first diamond auction.

The new commitment to transparency, as Angola’s Minister of Mineral Resources Diamantino Azevedo described it, overturns the previously impenetrable process. It required diamonds to be sold through an opaque government marketing system to buyers selected by the Angolan state.

From wink-wink to public auction. Angola is changing fast.