The Long Arab Spring? A guide to Sudan and Algeria

The gloves have come off in Sudan.

Sudan’s  Transitional Military Council (TMC) has indicated it intends to be not particularly transitional.

TMC head General Abdel Fattah al-Burhan  said in a statement broadcast on state television that they had decided to “stop negotiating with the Alliance for Freedom and Change and cancel what had been agreed on”. Instead,  there will be an in election in nine months time under “regional and international supervision”, the General added.

So now we know. The transition to civilian rule will be a work in progress. If ever.

All of this came to pass after a confrontation between paramilitary forces and protesters occupying part of the Sudanese capital Khartoum on Monday (June 3).

What this means is  Sudan is back to square one. The Sudanese people have managed to depose Omar Al Bashir but not the system that kept him in power.

This is a dispiriting development and moves Sudan back to the front pages for all the wrong reasons. Until now, both Sudan and Algeria had gone , ever so slightly off the news radar. The situation was recently described as a long Arab Spring by SOAS professor Gilbert Achcar, who has written extensively about the Arab Spring and the politics of the Middle East.

In Jacobin, the Democratic Socialist quarterly magazine, Professor Achcar offers an excellent analysis of how to read Sudan and Algeria.  This is not a new Arab Spring, he writes. “In reality, the uprisings in these two countries are the product of what I’ve been calling a long-term revolutionary process that started in 2011 for the whole Arab-speaking region.”

In other words, it’s a long Arab Spring, a continuation of what started in 2011.

The Professor  writes: “…economic and political grievances are driving another wave of popular revolts just like those we saw in Tunisia, Egypt, Libya, Yemen, Bahrain, and Syria in 2011. This confirms that it was wrong to view those risings as a ‘spring’ that would, just like the season, last a few months and end with mere constitutional changes, or end in failure. In reality, we are still in the midst of a long-term revolutionary process born out of the region’s very deep structural crisis.”

The structural crisis Professor Achcar explains as a “social and economic blockage brought about by the combination of IMF-sponsored neoliberalism and the rotten authoritarian political systems that impose it throughout the Middle East and North Africa.”

To my mind, that is the best explanation for the repeated, scattered, on-off convulsions in the Middle East and North Africa. The region isn’t experiencing seasons of discontent but a deep winter. The thaw  can only come with structural change.

As the Professor says, “the movements in Sudan and Algeria have learned the lesson (from Egypt, particularly) that one must get rid of the deep state.” The difference between the Egyptian uprising and that in Sudan and Algeria reaction is the fact the latter two continue. “In Egypt, people thought it was victory and emptied the squares after celebrating. But in Algeria and Sudan, people said that’s not enough and carried on demonstrating. They want to get rid of the whole regime, not just a few people at the top. Getting rid of the regime means giving back political power to civil society through democratic means including elections and provision of rights. Full relinquishing of power by the military is what the popular movement is insisting on in both countries.”

The people want to bring about an Arab Spring. It just hasn’t happened yet. 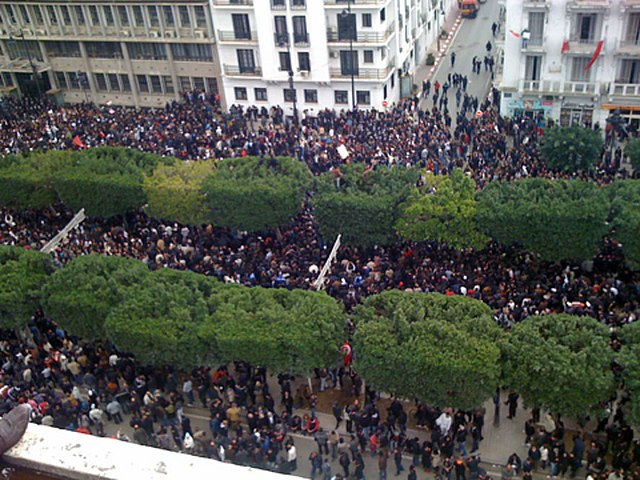