In Artemisia Gentileschi, we see the female gaze

Take a good long look at the painting. It’s probably one the earliest portrayals in the western world of sexual predation. And it’s painted by a woman – Artemisia Gentileschi, who was born in Rome in 1593.

Artemisia’s view of the emotions experienced by Susanna, a virtuous, beautiful young woman whose story is related in the Book of Daniel, would have resonance with women. She tries to ward off the attack by the two men who accost her as she is bathing in her garden. She is anguished. We are watching an assault and seeing it from the perspective of the victim.

This was very different from male portrayals of Susanna’s plight, of which more below. But first, there’s a reason Artemisia’s view of her subjects is being newly discussed. The National Gallery in London is putting on a major exhibition of some of her best-known works. It starts October 3 and will run through nearly the end of January.

So, why bother to look at Artemisia’s work? For one thing, she brings the female gaze to painting. Consider the way men had always painted Susanna as she suffers peeping toms. Tintoretto, the 16th century Venetian painter, depicted Susanna and the Elders as the story is called, many times. In one of his paintings from the mid-1500s, he portrayed Susanna as serene and abstracted, towelling a raised foot and regarding herself in a mirror, unaware of a bald man behind a rose trellis. Some 50 years later, Rubens shows Susanna reaching for a shawl, realizing that she’s being watched by two leering men. Ludovico Carracci shows one of the men tugging at Susanna’s robe. Giuseppe Cesari, who was known as Cavaliere d’Arpino, shows Susanna glancing seductively out from the canvas and brushing her golden hair.

As a piece in The Varsity notes,  Laura Mulvey’s analysis of the Gaze within culture and art in her Visual and Other Pleasures of 1989 was enormously significant. “Extending from Freudian theory, she asserted that imagery of women has been constructed in a way that makes them vulnerable to the objectifying gaze of men, and in a way that welcomed, or even invited, scopophilia. Put simply, female bodies were objectified by male artists for the pleasure of male spectators.”

Running through that list of portrayals of Susanna, almost none (except perhaps for Rubens) have the same resonance for women as that of Artemisia. (As an aside, she was raped by her tutor.)

Some might wonder if this is the usual stay-in-your-box argument for determinism in the creative arts. This goes as follows: only women can tell women’s stories; only black people can write about black people; only a bisexual trans person and depict something about the life of their community.

I’m not for that at all. It’s not about being a particular gender or colour. Storytelling is about being able to feel what someone else might. It’s not a given that a woman will always feel another woman’s pain. Sometimes, a man might feel it just as acutely.

But in Artemisia, we see the female gaze. 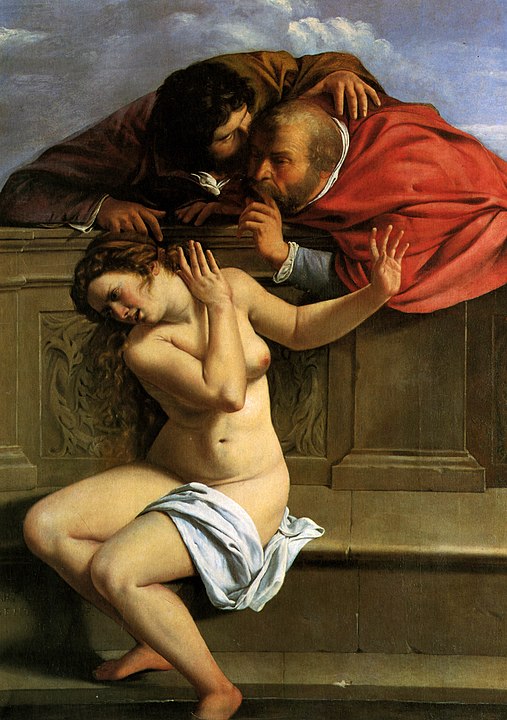