An ode to Ratatouille, a metaphor for our times

Some say (ok, it’s Wikipedia) that Bill Buford is credited with coining the term “dirty realism“. I have no idea if that’s true. What I do know is that Mr Buford was editor of Granta and an excellent captain he was too.

Anyway, Mr Buford has also long evinced a lively interest in food – not just any food, but good food. And he recently betrayed his predilection once again, with an ode to Ratatouille. (Not just any Ratatouille, but an exquisite, properly made dish, each of the five key ingredients cooked separately, never in the same pan. I urge you to read Mr Buford’s piece in The New Yorker, if you can. But if not, some of the highlights (and perhaps, more crucially, the recipe, is below).

First, Ratatouille is made with just five key ingredients (not counting garlic, which is there too): Eggplant, red peppers, onions, tomatoes, and zucchini.

Second, the quantities are roughly equal (by eye).

Third, and most important, the ingredients are all cooked separately. “Only at the end,” Mr Buford writes, “were the five cooked vegetables mixed together – in a pot, with shots of red-wine vinegar (a bright, slightly racy acidity, to balance the dish’s sweetness) – and heated gently. The process is said to produce a more animated jumble of flavors than if all of the ingredients had been plopped in a pan at the same time.”

A pinch of sugar

A pinch of saffron (optional)

Sprigs of rosemary and thyme, tied together into a bouquet garni, plus 1 tsp. of thyme leaves

A handful of basil leaves (optional)

1-3 Tbsp. red-wine vinegar, according to taste 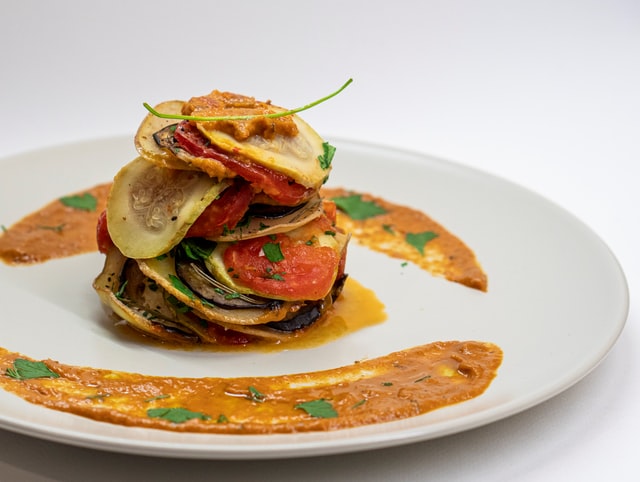