Inside the most cursed country in the world: Haiti

The murder of its president in his own home is yet another chapter in Haiti’s miserable history, says RASHMEE ROSHAN LALL, who spent three years living in the extraordinarily tragic nation

Within minutes of the news flash of the assassination of Haiti’s president Jovenel Moise last week, two things became clear about the killing: it was brutal, and the world would find it shocking but not surprising.

The grotesque violence of the incident — a head of state shot dead in his own home — would surely catch the world’s attention even though little else about Haiti now does, after multiple coups, the catastrophic 2010 earthquake and the worst cholera outbreak in recent history. But what does the assassination really say about a country that should, as the world’s first black republic, be an inspiration in the age of Black Lives Matter?

By rights, Haiti should be a shining template for change. It is the second country after the United States to throw off the colonial yoke, and the only state in history established by a successful slave revolt.

But the doleful description permanently appended to Haiti is of the poorest country in the Americas. The pandemic has added another: the only country in the western hemisphere that hasn’t vaccinated a single person against Covid-19. As Graham Greene put it in The Comedians, his 1966 novel on Haiti and its tragic state of abject need and absolute oppression: “Impossible to deepen that night.”

Haitians sum up their hopes and fears themselves, in a grim Kreyòl proverb: Ti Mari p ap monte, ti Mari p ap desann. It literally means that little Mari will not go up, little Mari will not go down, but the subtext is deeper than the obstinacy of a little girl at play. What Haitians are really saying is that nothing will happen, nothing will change. Everything will always stay the same.

It is a fatalistic prefiguring of everything that happens in Haiti and to it, even the murder of a president. Haiti has been here before. The last time it violently rid itself of a head of state was in 1915, when the brief, four-month presidency of Vilbrun Guillaume Sam ignominiously ended with his being beaten to death in the French embassy in Port-au-Prince. The body was paraded through the streets of the Haitian capital; weeks of chaos precipitated US military intervention and an unpopular occupation that lasted nearly 20 years.

Moise’s murder is unlikely to trigger a similar response from the US, which is exiting another failed 20-year attempt at nation-building in Afghanistan, thousands of miles away from Haiti. That said, the details emerging about the assassination are almost as horrific as in 1915.

According to the country’s police chief Charles Leon, heavily armed men — 26 Colombians and two Haitian Americans — shot the president at least a dozen times. He was found “lying on his back, with blue trousers, a white blood-stained shirt, his mouth open, the left eye gouged out”, said Carl Henry Destin, a magistrate in Pétion-Ville, the upmarket neighbourhood high in the hills of Port-au-Prince, where Moise lived amongst Haiti’s wealthiest in a well-guarded villa.

Moise’s wife was also shot and flown to hospital in Miami. She later described the attack as happening so quickly, her husband was unable to “say a single word”. One of Moise’s children survived by hiding in a bedroom.

Pétion-Ville has pretty French-style cafes, elegant old restaurants and shiny new ones, as well as well-stocked supermarkets and quirky boutiques.

The view from some parts of Pétion-Ville is deceptively charming — rows of purple, pink, lime and cream houses clamber up the mountains of Port-au-Prince.

But the colourful facades hide a shantytown, Jalousie, a neighbourhood in which 45,000 people live without water, electricity or sewage facilities.

Their brightly painted houses are the result of a $1.4 million civic project by Moise’s predecessor, president Michel Martelly, to prettify one of Haiti’s biggest slums rather than to effect real change.

It has been ever thus in Haiti, where an estimated 80% of the population lives in extreme poverty while a wealthy elite of a few thousand families admires the paintbox approach to slum management and controls the levers of power. Moise, Martelly’s protégé and a former banana exporter, is said to have tried to take on some entrenched interests, a foolhardy attempt without political capital.

The visceral nature and audacity of the attack on its president has triggered profound political uncertainty in Haiti.

Though unloved and seemingly unmourned — it is notable there has been no mass outpouring of grief — Moise’s death leaves Haiti in a precarious situation.It currently has no head of state, no functioning legislature, an unelected acting prime minister who has declared a “state of siege” that is essentially martial law, and a constitutional legal vacuum after the death from coronavirus in June of the head of its supreme court.

To complicate matters further, there are two acting prime ministers. The incumbent, Claude Joseph, says he is in charge and is refusing to step aside for Ariel Henry, the neurosurgeon appointed prime minister by Moise two days before his death.

Henry was due to be sworn into office but as that hasn’t happened, the US and the United Nations have thrown their weight behind Joseph. Even so, influential American voices on Haiti from within Biden’s Democratic Party acknowledge the bizarre nature of the situation.

Congressman Andy Levin, co-chair of the House Haiti Caucus and member of the House Foreign Affairs Committee, has said it’s “completely unprecedented. You’ve got a situation where there’s no government administration that’s seen as legitimate”.

The US and UN have their own reasons for backing the incumbent acting prime minister. To prevent Haiti’s descent into anarchy, or as Spanish daily El Pais said, from becoming “the Somalia of the Americas”. That would push Haitians to flee en masse wherever they could, as they have countless times before from natural disasters and political instability.

They could head for the Dominican Republic, (DR) which shares the island of Hispaniola with Haiti,
but would be driven back by force. Haiti and the DR have long had a testy relationship.

Or, as before, Haitians could pile into rickety boats bound for the US, which would add to the problems of Joe Biden’s administration as it tries to deter hundreds of thousands of migrants from Central America.

As has happened countless times in Haiti’s 217 years as an independent nation, the wider world is trying to keep the lid on a hot mess, hoping against hope that its volatility is contained within the half-isle.

After it won independence in 1804 by an extraordinarily brave slave revolution lasting more than a decade, the slave-owning United States isolated and ignored it. The US formally recognised Haiti as a sovereign nation in 1862.

There were no international ructions over the former colonial master France’s outrageous demand for monetary compensation for ‘lost’ Haitian slaves as well as Haiti’s profitable sugar and coffee-producing plantations. Haiti agreed, in exchange for recognition of its independence by France.

Its gargantuan debt — the modern equivalent of $21 billion — was only paid off roughly 70 years ago but the economic burden is considered to have severely depleted the former “pearl of the Antilles”, leaving it destitute and subject to a never-ending cycle of misgovernance, incompetence and the resulting despair.

Biden himself, in a previous avatar as chairman of the US Senate foreign affairs committee, admitted in a 1994 television interview that it’s “a God-awful thing to say (but) if Haiti just quietly sunk into the Caribbean or rose up 300 feet, it wouldn’t matter a whole lot in terms of our interest”.

What would matter is a power vacuum leading to political and societal turmoil of the sort that triggers a mass migration crisis and affects the US.

In the end, Haiti’s tragedy and god knows, there are all too many — the scourge of its politics, poverty, cholera, coronavirus — may be the fact that it is always considered a problem.

It is telling that even those who love Haiti, bemoan it as benighted, an unlucky place. The title of American author Herbert Gold’s memoirs of Haiti, his second home, says it all: “Best Nightmare on Earth”.

Rashmee Roshan Lall, PhD, writes on international affairs and lived in Haiti for three years. She blogs at www.rashmee.com and is on Twitter @rashmeerl 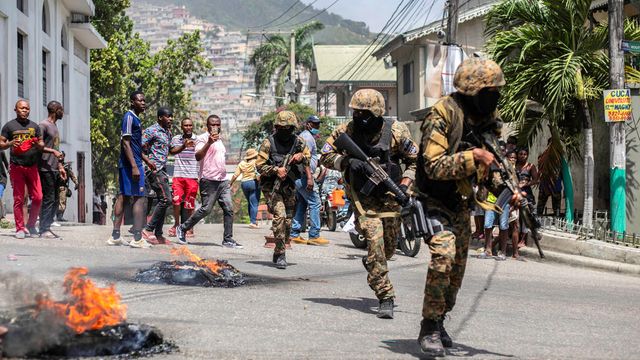