In conversation the other day with a writer who also teaches the art and craft of writing at university, I heard a dispiriting truth: that university students in Britain are no longer willing to read Paul Bowles.

He is, said the writer, considered beyond the pale.

I understand what the writer was delicately trying to convey. Bowles, who wrote about North Africa, was not beyond the pale; rather, he was too pale, a pale white male who travelled around recording his impressions of the world and pretending they were somehow true because he said them.

In other words, Bowles, whose ‘The Sheltering Sky’ is considered one of the seminal American novels of the 20th century, is a literary pariah for some; a disgusting little man with appallingly entitled opinions about people of colour and African countries.

In fact, the students would probably agree with the novelist Colm Toibin, who wrote a severe assessment (paywall) of Bowles’ biography in the London Review of Books in 2007.

“Long before the sin of Orientalism was discovered, Paul Bowles had frequently been guilty of it, in word, in thought and in deed,” Mr Toibin began. “In his first stories, for example, the natives are shining examples of naked otherness, created partly to refresh our view concerning the mixture of simplicity, guile and sexual beauty available in remote places. The white heroes, on the other hand, are neurotic and complex. Against artless allure, they have technology and a gnarled consciousness. When left to their own devices, the natives are cruel and irrational, in need of guidance and tips and the wisdom of Western laws and the bright, clear line of Western narrative.”

Mr Toibin did, however, admit that “Bowles’s trick as a narrator is to make each side as unreliable as the other.”

Quite so. He was a quite remarkable storyteller.

That said, Mr Toibin is right to remark that Bowles made North Africa seem “thrilling and alarming”. Is that so terrible? And that in ‘The Sheltering Sky’, in all the “excruciating encounters between Port and Kit, or between Kit and the third American, Tunner, there is always an Arab close by who is doing something alarming”.

As I’m currently reading ‘The Sheltering Sky’, I’ve been thinking a lot about  my writer friend’s observations on British students’ resistance to Bowles’s perspective and Mr Toibin’s criticism of the way he wrote about his chosen subjects and place.

Having some time ago read (with horror and admiration) Bowles’s short story ‘A Distant Episode, I had been looking forward to the novel. ‘A Distant Episode’ is probably one of the most chilling tales I’ve ever come across. It tells the story of a professor, a linguist, who’s wandering North Africa and has his tongue cut out by a gang of ruffians. It appeared in 1947 and in the course of its life, the tale has been regarded as both a masterpiece of storytelling as well as a disturbing and terrorising attempt to damn North Africa and its people.

As I now read ‘The Sheltering Sky’ I keep looking for all the bits those creative writing students find so objectionable. Is it the language? The mindset? The fact that Bowles was writing it from his own perspective, as an American man living almost permanently in Morocco in the middle of the last century?

Are we so far along in our militant approach to being non-judgemental and non-discriminatory that we can’t even enjoy a story from a distant, different perspective? 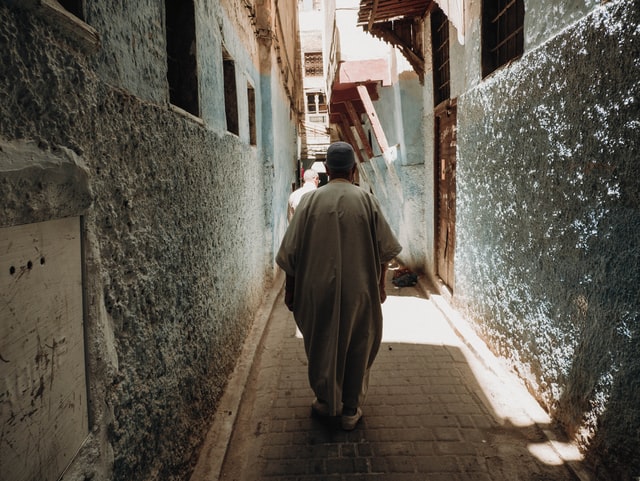