A crime wave in America?

With one eye on next year’s midterm elections, Republicans are talking about the alleged crime wave sweeping America. Republican Senator Tom Cotton has written a piece about crime for Breitbart in which he blames Democrats’ “criminal-leniency” for the “undeniable crime wave”, which supposedly includes property crimes.

But, as Judd Legum points out in Popular Information, FBI data shows that property crime actually declined in 2020. Popular Information adds that there is only a very slight rise — about 5 per cent – in violent crime, mostly in states like Wyoming with Republican governors and that murder rates rose in cities such as Ft. Worth, Texas and Jacksonville, Florida, which have Republican mayors.

I thought about the alleged crime wave as I walked around Amherst, a wee habitation of 1038 people in Wisconsin. Bags of compost lay outside the hardware store, which had closed for the night. Unlocked cars stood on the streets. People passed each other – and strangers – with a smile and a pleasant greeting. A mural quoting Malala was emblazoned on the wall of the gas station convenience store. And the International Bank of Amherst proudly championed October 11 as Indigenous People’s Day. One had the sense of a village enfolded in peace. Crime wave…what crime wave? 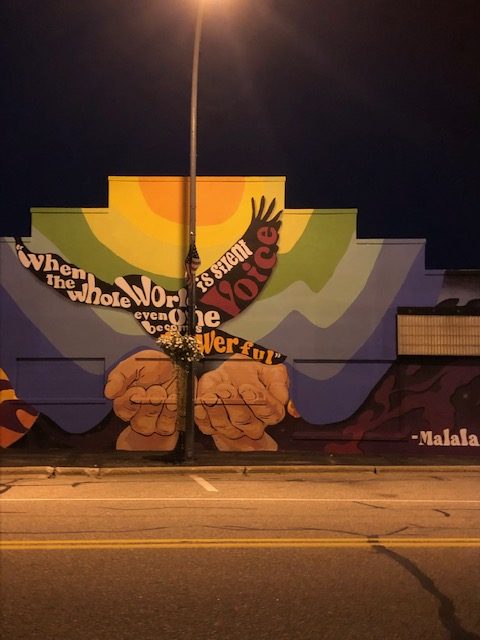