What Hungary does today, America does tomorrow?

It was Disraeli who supposedly said of the English heart of the industrial revolution that “What Manchester does today, the rest of the world does tomorrow.” At the time, Manchester truly was leading the world in building new sorts of machines and transport networks.

Today, it is Hungary that’s blazing a path for others. It’s not as shiny as Manchester’s innovations and certainly not new (illiberalism is as old as human civilisation). But a substantial part of the American political establishment, not least Republican former vice-president Mike Pence, is set to follow in Budapest’s wake.

In late September, Mr Pence was at a right-wing summit with Hungarian Prime Minister Viktor Orban. The conference, which included other nationalist European politicians, had “family values” on the agenda. Mr Pence spoke passionately on the “crisis that strikes at the very heart of civilization itself”, namely the fragmentation of the nuclear family, low rates of marriage and high incidence of divorce and abortion.

Mr Pence had sought a path increasingly trodden by Americans on the right of the ideological spectrum. In August, Fox News host Tucker Carlson was in Hungary, paying obeisance to Mr Orban. It remains to be seen who jets in to Hungary from America next year, when Budapest hosts another major gathering — the Conservative Political Action Conference, no less, which is  the annual gathering of the American right.

Much is being made of the ideological kinship of the Hungarian establishment and the American right. What may be more worrying by far is the twinning of political paths.

Consider what’s happened in Hungary and the implications for April’s national elections. As Celestine Bohlen, former New York Times  Budapest bureau chief, recently noted on Persuasion, Mr. Orban dominates “Hungary’s politics, its judiciary, its media and society. (He) has come by his considerable power legally, according to rules that he has been able to rewrite. Over the last decade, since his reelection in 2010, he has used a parliamentary supermajority to ram through laws that have tightened his grip on the country and its institutions, laying the foundation for what he calls an ‘illiberal democracy’, and others call a one-party state”.

Legislators of Mr Orban’s Fidesz party “have enacted repeated changes to the Hungarian constitution, weakening the powers of the Constitutional Court to act as a check on the power of the government. Other laws have undermined the independence of the judiciary, giving the justice minister the right to name judges and decide their budgets and promotions. The government has also asserted its control over the prosecutor’s office, by granting its current occupant an unusual nine-year term, and eroded the independence of the national media watchdog agency and the central bank. This near-monopoly on power has led to pervasive corruption, with the spoils, including media outlets, divided among Orbán friends and relatives”.

He has also, Ms Bohlen writes, rejigged “the electoral system in ways that help guarantee Fidesz’s electoral victories…Orbán’s opponents would have to win by more than three per cent of the national vote to defeat his party next spring”.

And crucially, she says, “Fidesz has succeeded in making it almost impossible for a new government to reverse course. Without a supermajority of its own, the opposition coalition would be hard-pressed to dislodge Orbán appointees from key positions of power, let alone push forward their own agenda”.

This is the system that Mr Pence and other members of the US Republican Party are saluting. In truth, Republican state legislatures are already pushing the same sort of anti-democratic electoral agenda.

What Hungary does today, the American right is already busily pursuing. Perhaps Hungary isn’t a template so much as a reaffirmation of the road being taken. 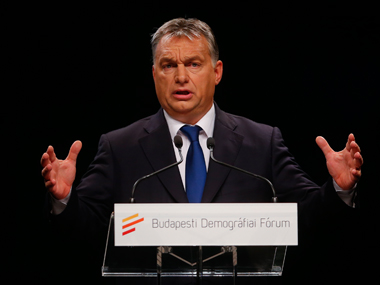