The Refugee Convention is dead: let’s bury it and start again

In the past decade, there’s been a shift away from international norms for protecting people displaced by war and persecution. What would it take to fix this?

The 1951 Refugee Convention is dead; all that remains is to formally bury it.

For too long, the convention, which defines the term ‘refugee’ as well as his or her rights, has been more honoured in the breach than the observance. So has the 1967 protocol to the convention, which broadened refugees’ rights by removing geographical restrictions — the original convention applied only to Europe — and giving people fleeing persecution anywhere equal claim to international protection.

The list of countries brazenly flouting the convention is long — and growing longer — even though a newly published flagship report by the International Organisation for Migration (IOM), the UN migration agency, says that the vast majority of people in the world (96.4%) continue to live in the country in which they were born. The World Migration Report 2022 adds that “trafficked migrants represent a small share of the 281 million international migrants in 2020” and that the pandemic had reduced the overall number of international migrants by roughly two million.

Even so, the fear of migrants — particularly those who may become asylum seekers and then be recognised as refugees — runs high, especially in the affluent West.

The UK is pushing ahead with a controversial immigration bill. Immigration lawyers say that the proposed law will penalise asylum seekers for having reached Britain by an illegal route, the only means available to most people. A 95-page legal opinion commissioned by Freedom from Torture, a human rights group, said that the British bill is potentially in breach of articles 31 and 33 of the Refugee Convention and that penalising asylum seekers — with a prison sentence of up to four years for entering the UK without a visa, for instance — negates its very “core”.

Despite sustained, pointed and legitimate criticism of the bill, it continues to move through the legislative process. Meanwhile, the British home secretary, Priti Patel, proudly heralded it on her Twitter account and described it as “ strengthening our borders”. For more than a year, Patel has reportedly been exploring a range of options to keep asylum seekers away from Britain. These include transporting them to processing centres on Ascension Island in the south Atlantic, or in Papua New Guinea, Moldova or Morocco — though no such arrangements have yet been formalised.

For the better part of a decade, the European Union (EU) has also been prioritising policies that go against the spirit of the Refugee Convention. After a record 1.3 million people, mainly from war-torn Syria, sought refuge in Europe in 2015, the EU tied aid for transit countries to improving migration management. In November 2015, the EU began to pay out € 3bn to Turkey in exchange for “the rapid return [to Turkey] of all migrants not in need of international protection”. In April 2017, the EU Trust Fund for Africa said it would spend €90m in Libya for “protecting and assisting migrants… managing migrant flows through the southern Libyan border [and] increased cooperation with Egypt, Tunisia and Algeria”. In June 2018, European leaders began exploring “ regional disembarkation arrangements “ for migrants in the Middle East and Africa. Though the bloc spoke of “post-disembarkation processing in full respect of international law and human rights”, the objective of this and the previous initiatives was clear — to keep the uninvited off European soil.

The EU and Britain are taking a familiar trail, one blazed by Australia back in 2013. That was when the prime minister, Kevin Rudd, declared: “From now any asylum seeker who arrives in Australia by boat will have no chance of being settled in Australia as refugees.” Asylum seekers were shunted off to Papua New Guinea and Nauru, with whom Australia signed so-called ‘regional resettlement’ agreements, the earliest versions of Europe’s disembarkation arrangements and Britain’s planned offshore refugee processing centres. Successful applicants could seek residency on either of those Pacific islands but would never set foot on Australian soil.

Operation Sovereign Borders (OSB), as it was called, was enormously successful on its own terms. From a 2013 annual peak of 20,587 people arriving in Australia by sea, the Australian Border Force’s monthly update for September 2021 says: “OSB intercepted no illegal maritime ventures and returned no potential illegal immigrants.” The UN refugee agency, the UNHCR, was critical of Australia’s offshore refugee processing centres even before the scheme had properly begun. Then, in March 2015, Australia was called out by the UN special rapporteur on torture for breaching the Convention on Torture and subjecting people to cruel, inhumane or degrading treatment.

But far from being an international pariah, Australia has become a role model, a template for one of the Western world’s most hard-bitten, results-oriented approaches to refugees.

In 2015, the far-right Dutch politician Geert Wilders borrowed the Rudd government’s “No way, you will not make Australia home” posters addressing refugees and issued a video with the same wording and “the Netherlands” substituted for Australia. As the Australian press noted at the time, Wilders praised the “sophisticated way” with which Australia handled refugees.

In June 2018, Hungarian strongman Viktor Orban’s foreign minister, Péter Szijjártó, stood before a well-heeled audience at London’s Chatham House think tank and defended his country’s new laws, which criminalised any help to a potential asylum seeker by an individual or group. Szijjártó spoke in admiring tones about Australia: “Yes, it is possible to protect the maritime border. Australia has proved that… This is number one, protection of external border [sic].” He complained that “the current EU policy is an invitation [to seek asylum]”.

Trump and the Mexican border

A year later, the US president, Donald Trump cited Australia’s controversial “no way” public messaging for asylum seekers and noted that “much can be learned”. By the time he was offering fulsome praise to Australia, Trump had already begun separating migrant children from their families at America’s southern border with Mexico.

That “ zero tolerance” policy on illegal border crossings led to at least 3,900 children being separated from their parents. It was in clear contravention of the 1967 protocol to the Refugee Convention. The US hasn’t ratified the convention but it has ratified the protocol, which means that it has to abide by the Refugee Convention’s provisions, according to one of the world’s leading research centres on international refugee law. This means the US must treat refugees in accordance with internationally recognised legal and humanitarian standards. They must respect the principle of non-refoulement, in other words not sending refugees to a place where they are at risk of persecution; provide them with a legal status, including rights such as access to employment, education and social security; and not punish refugees for entering illegally, or without a passport or visa. Mid-way through Trump’s term, a Vox report detailed seven ways in which it had become “all but impossible to seek asylum in the US”. This included detention, expedited removal and the “Remain in Mexico” policy, which worked like Australia’s offshoring solution to the refugee problem.

But even before Trump, the US wasn’t adhering to the Refugee Convention as honestly as it might. From the early 1960s, the US treated asylum seekers from communist Cuba as political refugees and those from nearby Haiti as economic migrants. The preferential system for refugees was at odds with the protocol of the Refugee Convention that governed their treatment. Clearly, countries have been getting away with bespoke adjustments to refugee policy for almost the entire lifespan of the Refugee Convention. That said, things have changed for the worse in the past decade, with countries around the globe increasingly interpreting the convention as they choose.

For example, in 2018, South Korea, one of the few countries in Asia to sign the 1951 Convention (even if only in 1992), responded with open hostility to the arrival of several hundred asylum seekers from war-torn Yemen. Nearly 700,000 people signed a petition on South Korean President Moon Jae-in’s website calling for their country to tighten refugee laws. The petition argued that unlike Europe, South Korea had never colonised other countries. “Europe may have historical baggage with countries (former colonies)… but South Korea has no such moral obligation,” it said.

Even though Moon is a former human rights lawyer, his government did not argue for compassion or acknowledge South Korea’s obligations to refugees under the convention. According to Human Rights Watch, South Korea has accepted only 2.5% of all the asylum seekers it has screened since 1994, a figure not including North Korean defectors. The Justice Ministry in Seoul subsequently denied most of the Yemenis refugee status, though a few hundred were given year-long humanitarian visas.

The sense that anything goes when it comes to refugees is exacerbated by the fact that Pakistan, which is not a signatory to the convention, is one of the five countries that host the most refugees. Bangladesh, also not a signatory, took in more than 700,000 Rohingyas from Myanmar. As for Turkey, which currently hosts more refugees than any other country, the UN refugee agency notes that “while party to the 1951 Refugee Convention, [Turkey] maintains the geographical limitation only to people originating from Europe. Despite this limitation, it provides non-European refugees with protection and temporary asylum, pending UNHCR’s search for durable solutions elsewhere.”

How to mend a broken system

So, what comes next? Countries that have ratified the convention but claim there are limits to their capacity to host the alleged ‘flood’ or ‘swarm’ of refugees need to improve operational processes. This includes reception at the border, the initial asylum interview, investigation of the case and depending on its outcome, either speedy resettlement in-country or deportation.

The post-World War II consensus on refugees was always subject to an individual state’s willingness to comply with the convention. The rights it promulgated were interpreted in different ways by different countries, but the broad overall thrust was generally accepted. This has changed in the past decade. It’s time to take a long hard look at what can be done, and how.

Investment in rapid reaction border teams — comprising translators, note-takers, civil servants, lawyers and human rights workers — would ensure the speedy processing of claims. This is the first hurdle faced by an asylum seeker. If they pass this test, the asylum seeker should be allowed to stay and work rather than be an economic burden to the state while their claim to refugee status is investigated. If the claim is rejected, the migrant should be deported as quickly as possible.

This would work both in Europe and the US, returning a level of certitude, compassion and credibility to the migration system. It could also help forestall the Far Right and its supporters’ claims that the borders are ‘open’ and that asylum seekers are “criminals” and “terrorists” by conveying the sense that migration is controlled. More importantly, it would allow progressive politicians to press for an overhaul of migration systems as a whole. 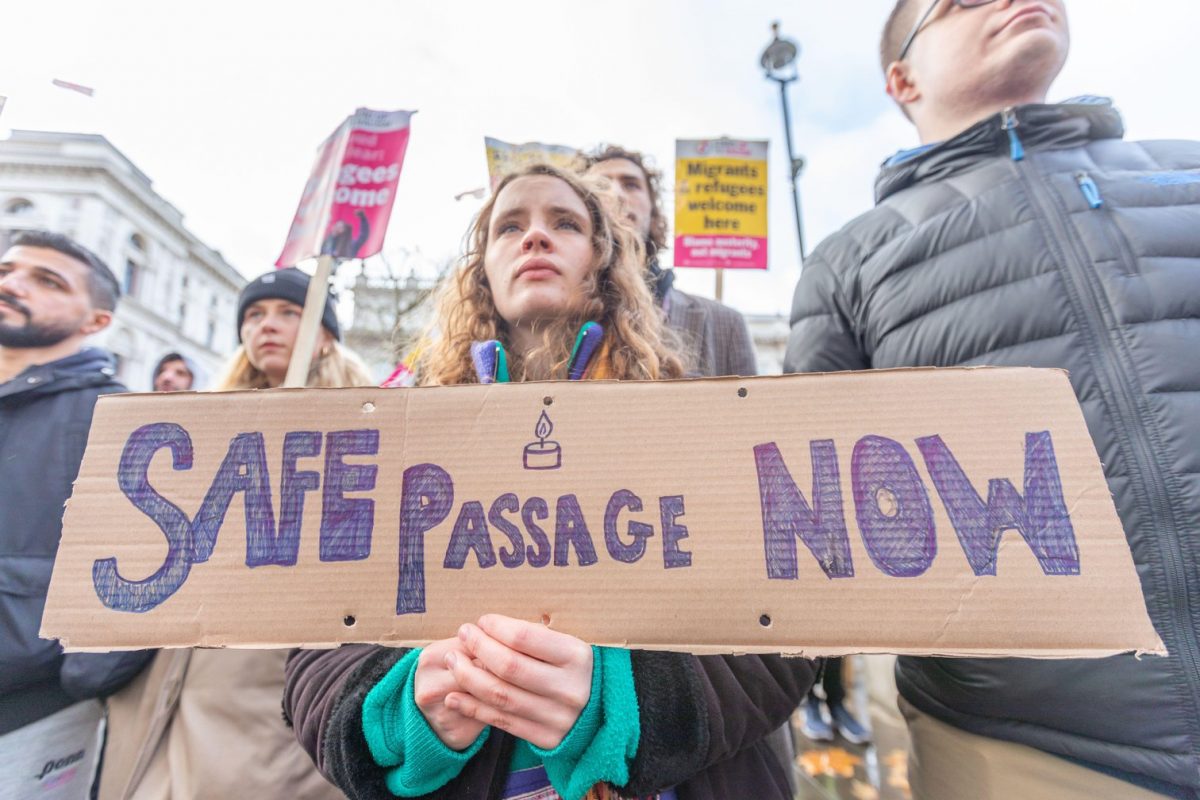