How will Taliban 2.0 interpret Sharia law in Afghanistan?

As the world waits to see the extent to which the Taliban’s victory will see the return of its brutal interpretation of Islamic law, RASHMEE ROSHAN LALL reports on different approaches used in other Muslim countries

In all the shock and horror provoked by the Taliban’s implacable promise to return Sharia law to Afghanistan, a basic fact is missed: Sharia has been a source of Afghan law for much of the past 20 years.

The country’s 2004 constitution, adopted by its western-backed government, declared that “no law shall contravene the tenets and provisions of the holy religion of Islam in Afghanistan”. It specifically recommended that Afghan courts look to Hanafi jurisprudence, the oldest school of Islamic law, for guidance.

In so doing, Afghanistan joined 15 other countries — Sudan has since left the club — including Saudi Arabia, the UAE and Mauritania, in implementing a classical Sharia system.

But the Taliban’s stated plan for Afghanistan has revived memories from its previous five-year stint in power. It was a grim period from 1996 of amputations, stonings, austere prescriptions on music and representation and a brutally enforced determination to render women invisible and unheard in public spaces.

Clearly, the Taliban’s version of Sharia law was — and may yet again be — very different from that adopted by the now-defunct government of Afghanistan. It’s all to do with interpretation and presentation.

Some 1,400 years after Islam’s founder, the Prophet Muhammed enunciated the Quran, the Muslim holy book, Islamic law is deeply controversial. In the seventh century, the word Sharia literally conveyed the idea of a direct path to water, an attractive, inestimably precious notion to a desert people.

Unlike the Torah, however, less than a hundred of the Quran’s 6,236 verses deal with actual legal issues. It would take a few hundred years after Muhammed’s death in 632 to cobble together the judicial principles of Sharia, which represents a moral system of ordering the world.

It would draw upon the Quran and examples from the Prophet’s life. A proliferation of stories or hadith about the Prophet were incorporated in the Sharia and its direction was set by the end of the ninth century, when the Abbasids, Islam’s greatest dynasty, ruled a vast cosmopolitan empire. The stories were often used to justify a more traditional view, as Sadakat Kadri, a practising English barrister, has noted in his magisterial survey of Sharia, Heaven on Earth.

For example, a well-respected Muslim jurist in the ninth century said it was lawful for women to lead prayers as they had since the Prophet’s lifetime.
Another said tradition allowed women to serve as judges. These “doctrines remain an ineradicable part of Islamic legal history,” writes Kadri, but “by the 12th century, their interpretations would be recalled merely as mistakes”.

Unsurprisingly then, to many, especially in the West, Sharia conjures up hideous acts of misogyny, persecution of LGBTQ communities and other horrors — beheadings, public floggings and forced veilings.

The United Nations has said Sharia punishments are “cruel, inhuman, degrading” and human rights activists have expressed concerns over many cases and in many countries.

Aceh, one of the most religiously conservative parts of the world’s largest Muslim-majority country, Indonesia, has faced harsh criticism since its 2016 implementation of strict Sharia law, with a German media outlet noting last year that it now had a bespoke eight-strong “female flogging squad” along with the men.

When tiny, oil-rich Brunei phased in new Sharia laws in 2019 on rape, adultery, sodomy, robbery, sex between men and insulting or defaming of the Prophet, a raft of celebrities including George Clooney and Elton John called for a boycott of the Dorchester hotels owned by the country’s investment agency.

Forced onto the defensive, Brunei’s foreign minister Erywan Yusof argued that Sharia law was about prevention rather than punishment. The country insisted that there was a high evidence threshold and that the maximum punishments of amputation or death would be rare — although critics were hardly assuaged.

Now there is rising consternation about Muslim-majority Malaysia’s proposal this June to amend its Sharia law in order to act against social media users who insult Islam and promote “the LGBT lifestyle”. However, same-sex acts are already illegal in Malaysia under a British colonial-era law (though convictions are rare) and some have argued that the changes — while showy — may be relatively cosmetic. Again, critics are unlikely to be convinced.

Across the world, Sharia law is applied to state laws, in some form or the other with varying degrees of zealousness or controversy, in nearly 50 Muslim countries. A classical Sharia system exists in Afghanistan, Saudi, the UAE, Mauritania, Egypt, Iran, Iraq, Aceh (in Indonesia), the Maldives, Malaysia, some states in Nigeria, Pakistan, Qatar, and Yemen.

As a 2015 New York State Bar Association paper on the compatibility of Sharia with international human rights law pointed out, “the majority of Middle Eastern countries, including Jordan, Egypt, Lebanon and Syria, have not adopted hadd (or serious crime) offences as part of their state laws”. It added that “of the world’s around 50 Muslim-majority states, approximately six allow for amputations, and one, Pakistan, is believed to have never carried out the penalty in practice”.

Though same-sex relations are legal in a handful of Muslim majority countries, including Indonesia and Lebanon, Sharia law appears bleak for LGBTQ communities because the Quran argues that homosexuality is unnatural.

And while Sharia gives women the right to inherit and the Quran says, at many points, that men and women are “created from the same essence”, there are obvious in-built gender inequities.

A woman can only inherit half her brother’s amount and her legal testimony too is worth half that of a man. Men are described as protectors and maintainers, which suggests their superiority over women. And devout women are supposed to be “obedient”.

The dual legal system allows practicing Muslims to take family and financial disputes to the Sharia courts and though their reach and jurisdiction varies by country, they usually deal with personal status issues, marriage, divorce, inheritance and guardianship.

What’s interesting though, according to Sami Zubaida, emeritus professor of politics and an expert on law in the Islamic world, is most governments’ pragmatic approach to Sharia to reconcile it with “modern sensibilities”.

From the early 20th century, for instance, both Ottoman Turkey and Egypt introduced restrictions on polygamy and gave women the right of divorce and custody of children, all measures that are “clearly in breach of the Sharia”.

So too in Iran. In Syria, a man wanting to take a second wife had to prove in court that he was financially capable.

In Iraq, the prospective polygamist had to demonstrate there would be equal treatment of his wives (an almost impossible task but one required by the Quran) as well as to establish a ‘lawful benefit’ from the new marriage because, say, the existing wife was infertile.

As recently as 2016, Yahya Jammeh the former president of Gambia, announced a ban on child marriages, a practice that is not outlawed by Sharia.

Within 10 years of the 1979 Iranian Revolution, its supreme leader Ayatollah Khomeini found it necessary to declare the government’s right “in the public interest”, to release itself from the commands of the Sharia on land reform and labour law.

This, because conservative clerics had repeatedly obstructed legislation on land redistribution and employment conditions such as wages, holidays and health and safety, on the grounds they didn’t conform to Sharia.

Zubaida notes that the “authorities, over the centuries of Muslim history, always declare allegiance to the holy law and largely bypass it in matters of state”.

Evidently, problems arise when they do not, as with Afghanistan’s previous Taliban administration and until recently, Saudi Arabia.

Like the Saudis, one of only three countries to recognise the Taliban government back in the 1990s, the Taliban applied the Hanbali school of law, the strictest and most conservative form of Sharia.

In the past few years, the Saudis have tinkered with their system, making very public and propaganda-rich changes.

Saudi women can now drive, travel without a male guardian and are encouraged to study and set up businesses.

In 2019, the country’s first female ambassador was despatched from Riyadh to Washington DC, with the second following a year later, to Oslo. Concerts are now allowed in pre-Islamic sites in Saudi Arabia.

They haven’t changed their traditional or preferred school of law but the Saudis are clearly embracing the pragmatism seen in other countries that use Sharia.

What this might mean for the Taliban 2.0 is hard to predict. But
it’s clear that in 2021, no one, not even Saudi Arabia, applies Sharia in the way the Taliban did in the 1990s.

Originally published at https://www.theneweuropean.co.uk on August 25, 2021. 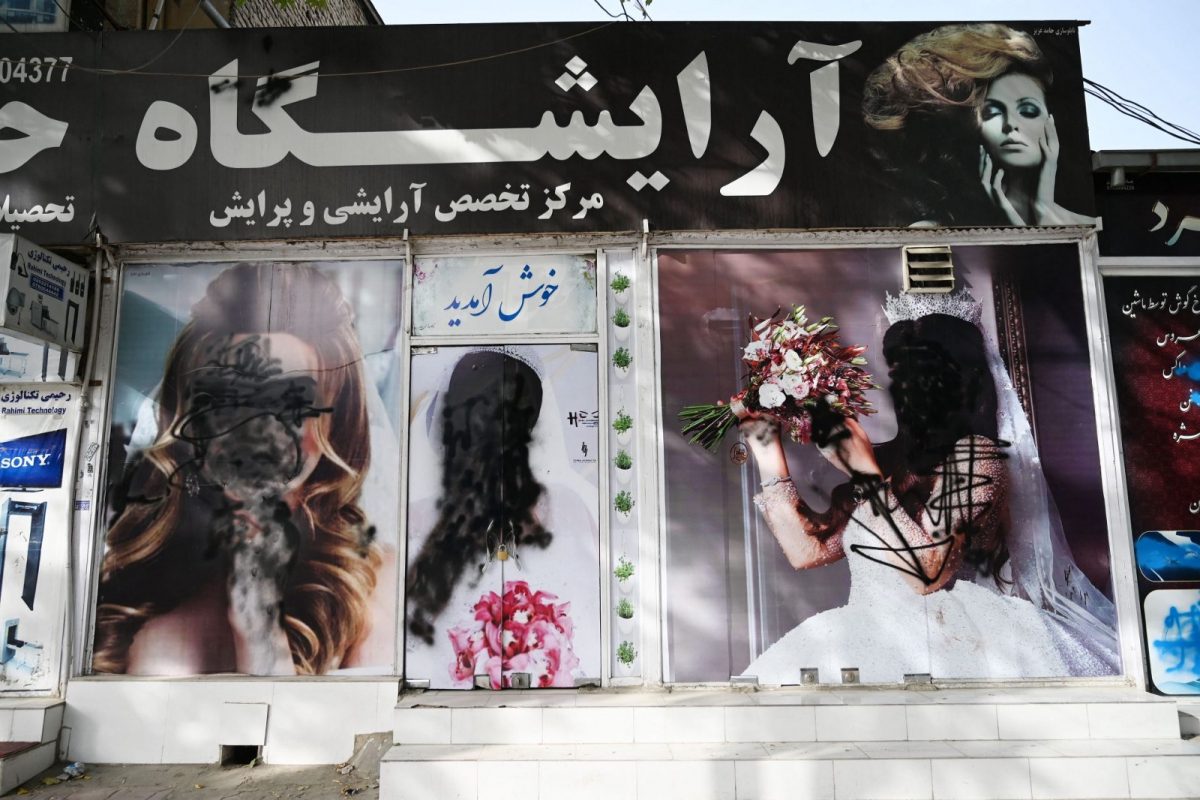