That’s at least partly because “Ukraine’s Jamie Oliver”, a chef called Ievgen Klopotenko, turned to borscht when he set out to overcome past culinary annihilation in his country. “Seventy-five years of the USSR changed our memories,” he is quoted to say. “I would ask people, tell me five Ukrainian dishes, and no one could. I was almost crying.” So, he decided to start  resurrecting borscht.

Every Ukrainian’s favourite borscht is their mother’s or their grandmother’s. – Ukrainian maxim

So far so good. The problem is that Mr Klopotenko is also quoted to say that people mostly mentioned “borscht and salo”, salted pork fat, in response to his question about Ukrainian dishes. Why then would he need to focus on borscht in order to, as the FT piece says, “resurrect Ukrainian food”.

Perhaps it’s because he wanted authenticity? Perhaps he was searching for the definitive recipe of the Ukrainian national dish, borscht? If so, he must have very quickly realised that borscht varies, not just by region but by individual cook. As the Financial Times says, “There’s a maxim that every Ukrainian’s favourite borscht is their mother’s or their grandmother’s.”

Ms Steavenson, the journalist, is quite lyrical about her first borscht in war-hit Ukraine. It’s more than “a kind of beetroot soup”, she writes, being “thick, rich, complicated; sweet and sour and salty and tangy, bright with dill, creamy with a dollop of smetana, sour cream.” She adds, “it was more than a bowl of soup. It was an embrace.”

A borscht embrace can have many different strokes. Though it’s basically a stock (meat or vegetable) with beetroot (grated, cubed, pickled, fermented, juiced), it’s also allowed to add anything else you like. Not quite a soup and not quite a stew, as the piece says, borscht can be red with beetroot; green with sorrel or nettles, or yellow with sugar beet or rutabaga. In Lviv, borscht has stewed pears and prunes. In the Carpathian Mountains, it has cep mushroom and boar’s blood. In Soviet times, cheap sardines made fish stock for borscht. Odessa’s Jewish families make theirs with chicken stock; the Muslim Crimean Tartars use lamb and in some parts of southern Ukraine, borscht is made with tomatoes and peppers.

Unsurprisingly, Ukraine is passionate about the borscht battles. But these were running pretty hot even before the February 24 invasion by Russia. We’ll explore that next. 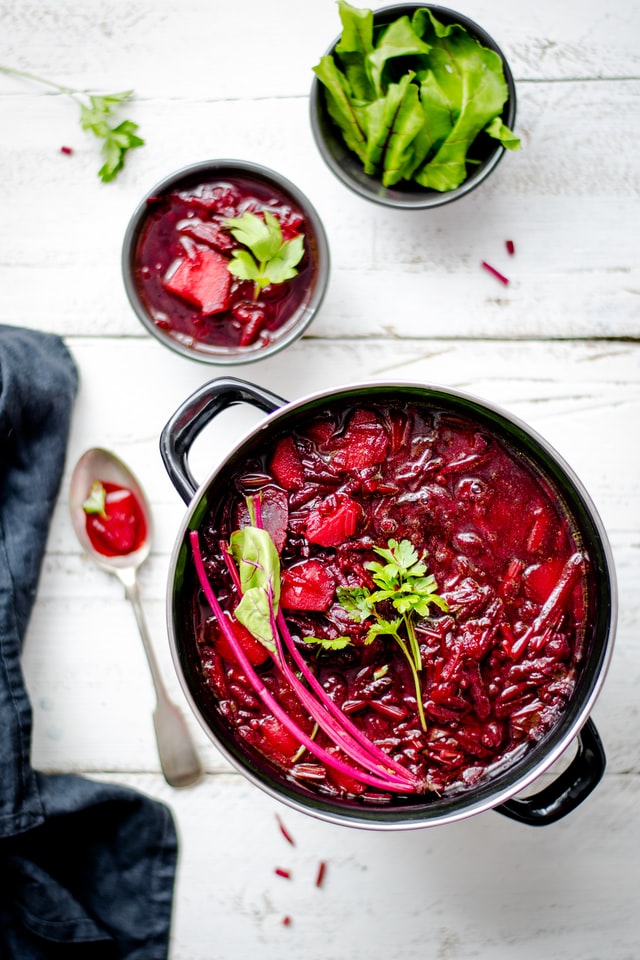