Could Sri Lanka’s Rajapaksas return, like the Marcos family?

Could the disgraced Rajapaksas return to power, like the Marcos family has in the Philippines?

Sri Lanka’s dramatic demonstration of people power — forcing a despised president to flee the country — has rekindled memories of a similar peaceful uprising on another island nation, the Philippines.

But thoughts are also turning to the sobering denouement of that public protest in Manila nearly 40 years ago.

In Sri Lanka, as with the Philippines in 1986, a largely non-violent uprising has driven out a leader whose family had wielded power for a couple of decades.

In both countries, the world watched as crowds surged into the opulent presidential palace, gawping at the luxury amid which their leader lived.

As with the Marcos political dynasty in the Philippines, Sri Lanka’s Rajapaksas are accused of enriching themselves at the expense of their country.

And now, some supporters of Sri Lanka’s former president Gotabaya Rajapaksa and his family are hoping the parallels with the Philippines go even further.

Tharaka Balasuriya, a minister in Rajapaksa’s government and a member of parliament belonging to Rajapaksa’s Sri Lanka Freedom Party, recently told the BBC: “We saw what happened in the Philippines, Marcos’s son has returned to power… So at some time, someone from the Rajapaksa family could come back to power. So I would never say never…I wouldn’t bet against it.”

Balasuriya is referring to the success of Ferdinand Marcos Jr, the son and namesake of the former dictator, who was sworn in as the Philippines’ 17th president last month, in a remarkable reversal of the disgrace that had dogged the family’s name.

In May, Marcos Jr, who goes by the nickname ‘Bongbong’, won a landslide election victory, with his political allies also securing control of the other legislative chambers.

Some analysts agree that there are profound and occasionally troubling similarities between Sri Lanka and the Philippines.

Jayadeva Uyangoda, a political scientist at the University of Colombo, told openDemocracy that “there are some similarities in what happened in the Philippines in 1986”, even though “the Philippines under Marcos was a much more repressive dictatorship, with open support from America”.

Sri Lanka, he added, “is a peculiar case of autocracy of an executive authoritarianism under a so-called executive president, yet with institutions of democracy (elected Parliament, a multi-party system, free and fair elections, relatively untainted judiciary and media) functioning side by side.”

The current situation in Sri Lanka seems exactly like the Philippines

Swain, who has long focussed on the Tamil insurgency in Sri Lanka and the poisonous brand of majoritarian Sinhalese politics brought in by the Rajapaksa family, says it is sensible to be cautious about future developments.

“For the time being, the ‘revolution’ has been successful, that’s all one can say right now for Sri Lanka. Remember, [in the Philippines] the son [of dictator Marcos] is back. So, all one can say is, the Rajapaksas are gone… for now.”

He added that the Marcos family’s stunning political rehabilitation must surely offer hope — and possibly even a template for action — to fallen autocratic dynasties everywhere, not least in Sri Lanka.

The reference is to the Marcos family’s refusal to abandon the Philippines’ politics for too long after the uprising. Bongbong Marcos, for instance, returned to frontline politics in the family stronghold of Ilocos Norte after his father’s death in exile in Hawaii in 1989. Even his mother, Imelda, the former first lady who is infamous for her 3,000-pair shoe collection, twice ran unsuccessfully for president in the 1990s.

Meanwhile, the Marcos era has been inaccurately portrayed on social media channels as a period of economic growth and glorious certainty. The country has been described by a senior Facebook executive, global politics and government outreach director Katie Harbath, as “ patient zero “ in the global disinformation epidemic.

In Sri Lanka, the myth-making about the Rajapaksas may have already begun. Balasuriya has questioned whether the current economic crisis is the result of the Rajapaksa family’s alleged dishonesty. Instead, he said, Rajapaksa could perhaps be blamed for no more than a series of unfortunate policy decisions such as cutting taxes.

Days after Rajapaksa’s 14 July resignation, his party praised him for “ending terrorism”, saluted his “service as a war hero” and blamed the “complex challenge” of the COVID-19 pandemic for the worst economic crisis in the country since independence in 1948. The party has also lauded him for stepping down as president, stating that “the relinquishment of political power is rarer than anything else”.

There are signs, too, that the Rajapaksas will not easily give up on their place in public life. The former president’s resignation letter, which was read out in Sri Lanka’s parliament on Saturday, struck a defiant rather than despairing note and hinted at a possible return. “I served my motherland to the best of my ability, and I will continue to do so in the future,” he said.

He described his family’s current predicament as a “temporary setback”. Namal, whose father Mahinda resigned as prime minister in May, having also served as president from 2005 to 2015, added: “This is a rough patch, so face it and move forward.”

Some Sri Lankans say that the Rajapaksas may even be helped in the short term by newly elected president Ranil Wickremesinghe, to whom Gotabaya controversially bequeathed the responsibilities of his office when he fled the country. The Rajapaksas’ party, which has the largest number of seats in the legislature, backed Wickremesinghe as its candidate.

But for now, Sri Lanka’s politically powerful house of Rajapaksa has undoubtedly been humbled. Just as the Philippines’ “bloodless revolution” was once seen as the “ world’s bright spot”, Sri Lankans’ restraint and resolve in dealing with allegedly corrupt and populist leaders are being praised.

Even so, for many Sri Lankans, there may be a lingering fear that the Philippines will serve as a model for another ‘son rise’ in the east. 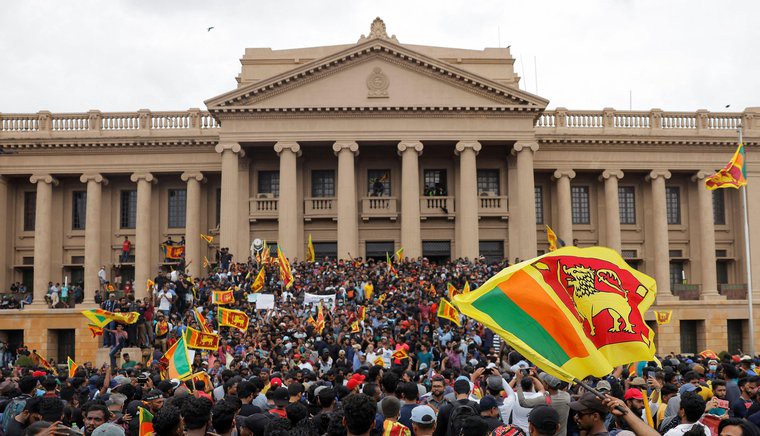