India’s experiment in financial inclusion is paying off

One of the world’s foremost experiments in financial inclusion is marking its eighth birthday. India’s Pradhan Mantri Jan Dhan Yojana (PMJDY), also known as the National Mission for Financial Inclusion, aims to provide the unbanked a basic savings bank account as well as banking services that include a RuPay debit card. It was launched by Prime Minister Narendra Modi on August 28, 2014 and has since clocked up notable successes.

In 2014, just 53 per cent of Indian adults had a bank account, compared to 62 per cent globally, according to Global Findex, the database launched by the World Bank with funding from the Bill & Melinda Gates Foundation to measure financial inclusion in more than 140 economies around the world. But the PMJDY changed the picture substantially. According to the 2017 Global Findex report, 80 per cent of Indian adults had bank accounts.

The scheme has an entry in the Guinness Book of World Records for “the most bank accounts opened in one week”. A little over 18 million accounts (18,096,130 to be precise) were opened between August 23 to 29, 2014, just days after the PMJDY was inaugurated.

Unsurprisingly, the scheme has drawn praise, not least from economist Agustín Carstens, who lost out to Christine Lagarde for the 2011 selection of head of the International Monetary Fund. In 2019, five years after India’s push to open accounts for huge swathes of the back country, Mr Carstens noted that the PMJDY had done a good job of introducing households to basic transaction accounts. He should know. As a former finance minister of Mexico and former governor of its central bank, Mr Carstens is aware that his country has been puzzlingly poor on financial inclusion. With just 37 per cent of adults boasting a bank account, Mexico stands much below the level  of other lower-middle-income countries like Kenya and India.

According to the Center for Global Development, one of the main reasons for Mexico’s low levels of financial inclusion is the  failure to incentivise the banking sector to serve poor customers’ needs. Not so in India, it seems, where there is more energy about the need to grow its peoples’ access to economic opportunity, as well as to allow the government to design and deliver cash transfers more effectively.

In fact, on the eighth birthday of the PMJDY, official self-congratulatory mention was made of the data thrown up by a special app that tracks banking access for villages across the country. The Jan Dhan Darshak app now records that just 143 Indian villages lack banking touchpoints within five km, compared to 11,000 villages sans such access in October 2019.

As Ruchir Sharma, chair of Rockefeller International, noted on the 75th anniversary of Indian independence (paywall), the Indian welfare state is a great deal more efficient, which reflects a digitising economy. And reducing the numbers of the unbanked…and unseen. 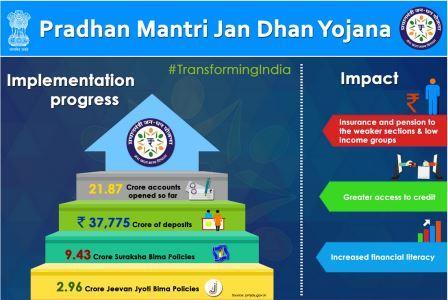