It says a lot about the scale of Britain’s current troubles that the history-making aspect of Rishi Sunak’s ascent to 10 Downing Street was mentioned much less than its effect on gilt yields soon after he won his Conservative Party’s vote.

That Sunak, a third-generation immigrant of Indian origin and a practising Hindu, has become Britain’s first non-white prime minister – and the youngest since 1812 – is being acknowledged as remarkable. But much less than what one economist described as the precious “dullness dividend” that might come from “a vaguely competent, boring even, prime minister leading a stable government with economic policies that add up.” With the pound rising as it became clear Sunak was generally seen by the markets as a safe pair of hands, British commentators pounced on the calming effect that the former chancellor might have on the roiled economy.

There is much less chatter than one might expect about the striking symbolism of Sunak’s rise to Britain’s top political job, both in visual terms and in the new axis of aspiration and inspiration it sets for ethnic minorities in the country. That too on so symbolically significant a day as Diwali. All the colour about the glass ceiling Sunak has broken as the first of 57 prime ministers not to be white is now mainly coming from the sub-continent. The airwaves are replete with vignettes from India, with smiling Indians crowing about “reverse colonisation” and the “brightest Diwali in years”. For now, the conversation in Britain’s Conservative Party and among most people is not about Sunak’s ethnicity but his expertise.

That would be admirably meritocratic had Sunak not been thwarted in his quest for party leadership and the prime ministership less than eight weeks ago. That time too, he had the most support among Party MPs but lost out to Liz Truss – the last white woman in the race – when the vote of roughly 160,000 mainly old, white Conservative Party members out in the shires became the deciding factor. Then, the reasons Sunak fell short seemed less to do with competence than skin colour. In this instance too, with Britain poised to get its third prime minister in almost as many months, Sunak’s ambitions might have been dashed had the party membership voted. Just the other day, a party member, who loudly trumpeted his “patriotism” and his fierce “love for England”, went on a popular talk radio show to denounce Sunak as “not even British”.

It’s of a piece with the muttered imprecations that were heard when Sunak first ran for election as a parliamentary candidate in one of the safest Conservative seats in Britain. In 2015, Richmond in the Yorkshire Dales had voted Conservative for 105 years. There were ructions when prime minister David Cameron decided to remake politics in a less racist mould by forcing reluctant local constituency parties to pick ethnic minority candidates via safe seats, not in marginals, the iffy constituencies that could go either way.

At the time, there was an outpouring from Richmond of euphemistic racism. Over 95 per cent white, with only 122 ethnic South Asians then reported to living there, Richmond dismissed its putative MP as a “townie”, a non-Yorkshireman and then, that killer phrase from some farmers: “He doesn’t really fit in round here”.

It’s fair to say that many in Britain still discern a foreignness to Sunak, for all that he was born in Southampton, sounds very English – propah upper class, public-schooled English – and his grandmother was the first member of the family to arrive in Britain, too long ago to remember.

It never came to a party membership vote so Sunak got the big prize of the big job, in less than ideal circumstances.

Even so, Sunak’s prime ministership begins a new era for Britain, one that seems practically American in its transformational qualities. Back in the summer, as he fought the doomed race to become Conservative leader and prime minister, alongside his wife Akshata Narayan Murty and their two young  daughters, Krishna and Anoushka, the Sunaks seemed a little like the Obamas in America circa 2007. At the time, the Obamas too looked, as a senior British editor told me at the time, “too black” to ever get to the White House. So too the Sunaks, to Downing Street, after an epic struggle.

As David Shih, a professor of English, has written, “the textual path between something and its social meaning” is particularly interesting when it comes to racism. Once, Sunak was said to “not fit in”. Today, he does, only just, but with such English understatement about the momentousness of his win that the original churning vanishes from view. Call it the U factor. 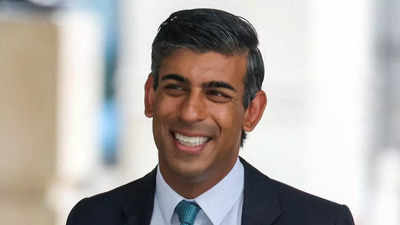