Sunak made history but UK’s stature’s getting unmade

As the old year took one last breath and exhaled, it seemed to blow a raspberry straight at Rishi Sunak, Britain’s first non-white prime minister, its richest ever and its youngest in 210 years. With a roster of crippling public sector strikes and the British people facing the biggest drop in living standards on record, a history-making PM now seemed to have the unenviable task of helping a former sea-faring empire sharply trim the sails of its ambition.

It didn’t help that a new poll, commissioned by the country’s newest broadcast channel GB News, had found that a majority — 57% — of the British public believe “nothing in Britain works anymore.” GB News, which is on the right of the political spectrum, Sunak’s home territory, had also ascertained that Boris Johnson is regarded as the “most competent” of 2022’s three PMs. For Sunak, three percentage points behind Johnson’s 32 on that poll, nothing seemed to be working particularly well anymore.

Originally published at https://timesofindia.indiatimes.com on January 4, 2023. 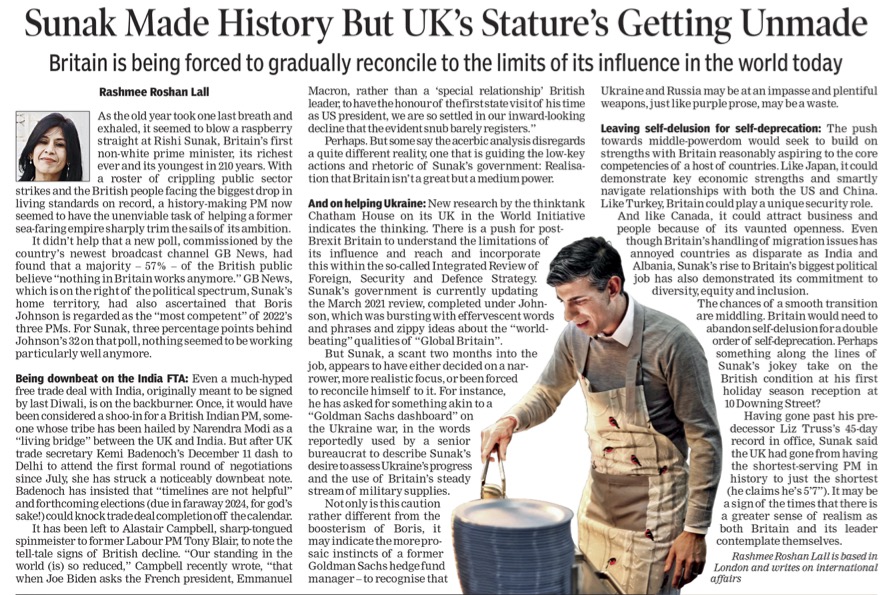