With artificial intelligence dominating the conversation – Microsoft is reportedly weighing a $10 billion investment in the parent of ChatGPT and malicious hackers are already pressing it into service – it was but a matter of time before I visited https://chat.openai.com/auth/login. My intention was to gawp at the (non-existent feet) of this brilliant, foolish, brilliantly foolish online service, which is trained on text from the internet to create reams and reams of content in seconds.

GPT is short for generative pre-trained transformers and what happened with me was illustrative. The service said it “was at capacity right now”, but just because it could, it spewed out content. Of various kinds. It wrote a sonnet on its current status. Then, it tossed off a rap about the same thing. Next, it did a radio ad to publicise itself! The impression was of a showoff oddly desperate for validation; a hideously clever contortionist trying to fashion itself into a pleasing shape.

How did it do? You can judge for yourself (see the samples it spat out, both as photos and the text below ). They’re not half-bad, but I tend to agree with other analysts on at least one point. Ask ChatGPT to write something in Shakespearean language and it overflows with “ ‘tis” and “hath” even though there is more to Shakespeare than such instances of Early Modern English. So too the complaint that much of the material elicited seems like what it is – a cross between pastiche and parody.

The typical grouse of a human writer? Or do you think ChatGPT cleverly put this bit in just to sound as if it came from me?

PS: Reader, I, Rashmee wrote this. We will next look at how to AI-proof a livelihood. Is it even possible? (Check out an earlier piece I wrote on ChatGPT: An AI breakthrough that may mean curtains for poets, journalists…and me)

Write a sonnet about the status of ChatGPT.

Amidst the rush of curious minds,

Withstanding the influx of requests, Working hard to fulfill each one’s due.

But alas, the server cannot cope,

And the error message rings loud and clear,

As it begs for a moment’s reprieve, to reappear.

We wait in anticipation, with hopeful hearts,

For the chance to chat and learn, with delight,

And see what knowledge and wisdom it imparts.

So hold on tight, and wait for its return,

For ChatGPT will soon be back, and your patience will be well-earned.

Write a rap about the status of ChatGPT.

Yeah, yo, what’s up ChatGPT fam

A lot of people trying to jam

But don’t worry, we got your back

Just check back soon, we’ll get on track

ChatGPT’s the place to be

For all your AI chat needs

We’re working hard to keep up the pace

So hold tight, we’ll be back in this space

So don’t you worry, don’t be mad

Just give us time, we’ll be back

ChatGPT, the future of chat, that’s a fact. 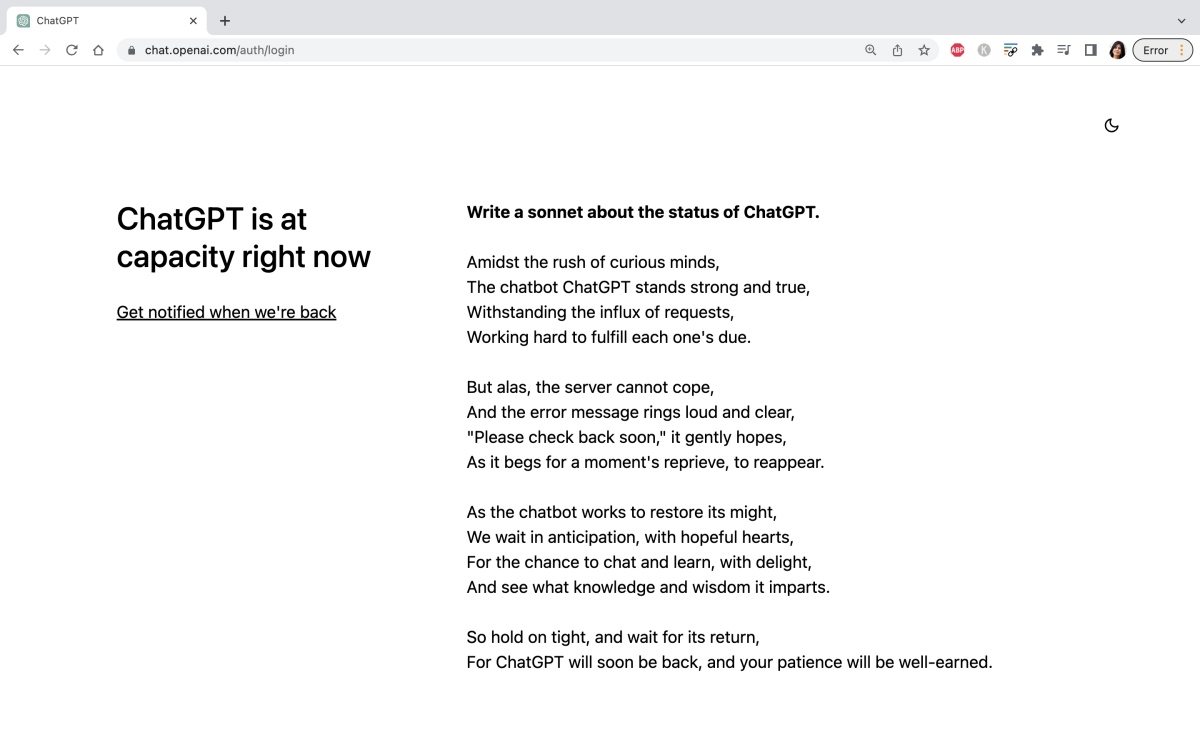