Do you really believe Donald Trump cares about justice for Hillary?

In his three months as president, 18 months on the campaign trail and decades in public life, Donald Trump has not demonstrated great regard for truth, justice, honesty and fair play.

When it suited him he filed for bankruptcy and let the small traders to whom he was in debt suffer. When he was so minded he led the scurrilous birther campaign to humiliate America’s first visually black president Barack Obama. When it was expedient, he did deals with whomever, over whatever. He has acknowledged he ran scams. (Remember his description in The Art of the Deal of the fakery he used in 1982 to win Holiday Inn corporation partnership on his first Atlantic City casino? Click here to read about it.)

He has told brazen and outrageous lies about President Obama wiretapping Trump Tower, millions of illegal voters and his own plans to reveal his tax returns (he promised he would; then he said he wouldn’t.)

Why then, on Tuesday, May 9, 2017, should we believe Donald Trump’s justification for firing FBI director James Comey?

Mr Trump claims he has done so because Mr Comey bungled the investigation into Hillary Clinton’s email and was, therefore, “not able to effectively lead the bureau.”

How can this be the President’s reason for dismissing Mr Comey? Mr Trump has praised Mr Comey’s role in the Clinton email investigation.

President Trump may yet prove to be America’s Chavez. 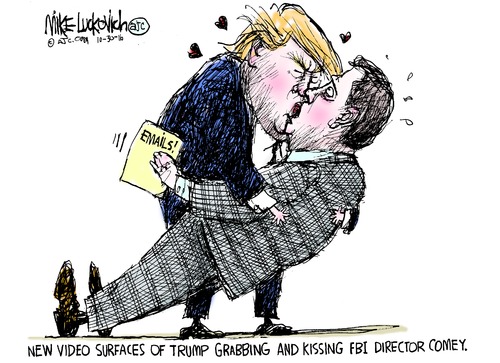