Hands up if you’ve ever had a plate of cauliflower rice or a bowl of courgette noodles, washed down with a cup of almond milk. If US milk farmers and rice and pasta producers had their way it would be a crime to have bought and consumed those food items labeled in the way they are.

At the moment the argument is particularly heated over cauliflower rice. Rice companies point out – correctly but in curmudgeonly fashion – that cauliflower “rice” is not rice but a riced vegetable.

It’s a repeat of milk farmers’ long-held lament that milky white liquids extracted from soy, cashew and almonds are not milk at all and should not be found in the dairy section.

I suppose it’s only a matter of time but I haven’t yet heard pasta companies complain about noodle-mimicry by way of spiralized vegetables (coodles, boodles etc). And there doesn’t yet seem to be much corporate heartburn about sweet potato “lasagna”, which are really just slabs of the vegetable cut to resemble sheets of the carb-rich real thing.

Some say it’s outrageous for milk and rice producers to try to lay claim to nouns – “milk”, “rice”. As Michele Simon, executive director of the Plant Based Foods Association told Quartz, “Just as with milk, no one owns the word ‘rice’.” She points to at least two US lawsuits (against Whitewave Foods in 2013 and against Trader Joe’s in 2015) when US judges dismissed cases that sought to stop companies using the word “milk” for soy milk.

Even so, it’s worth thinking about the art and science of food labeling. Does it help to label foods in a manner that can only really be called counterfeit? Quorn burgers at least indicate that they are not made of meat but only resemble it in appearance. They are still made of protein and a burger patty, as we all know, doesn’t have to be meat. It can be made out of beans, vegetables or even crickets, as I just ate. But can a riced vegetable really be classed as rice, a starchy food that offers very different nutrition? Should vegetable noodles really be described as something that is a carbohydrate?

Would it not confuse young people, especially unsophisticated eaters, if #fakefoods became more of a trend? What if, for instance, a ball of puffed rice coloured orange started to be sold as Lo-sugar Non-fruit Orange?

Would it help to explain #fakefoods as real in their own way? Ie “Rice-like” Cauliflower. “Lasagna-like” Sweet Potato?

Way more clunky, it’s true. But pretty accurate, thereby maintaining the integrity of both the original and the substitute. 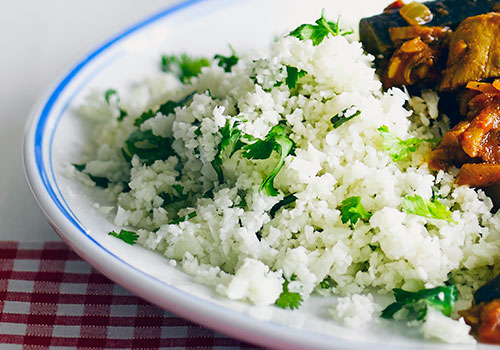