Tis well to remember: The long shadow cast by France on Syria

To many people, Syria spells no more than a long-running civil war, a dangerously internationalising multi-sided skirmish and the tiresome but troubling threat of ever more refugees.

But British Arabist Diana Darke’s book, ‘The Merchant of Syria: A History of Survival’, is worth reading if only to re-focus on a few key points about Syria. They matter because history casts a long shadow.

As the Ottoman empire disintegrated, there was rising want and misery. Ms Darke writes, for instance, of how the Damascus-headquartered Ottoman Fourth Army impounded all farm animals for its own use. Add to that a series of natural disasters such as drought, a 1915 plague of locusts and the 1916 harvest-reducing heat wave.

Then came the age of the European mandate.

Mandates were supposed to be a provisional arrangement of unspecified length, initially expected to last a mere three years. The French mandate lasted 26 years in Syria; 23 in Lebanon.

Another interesting historical note that resonates today is the French rulers’ toughness on Syria.

Just as today, Ghouta oasis, east of Damascus, where many of the rebels were from, suffered terrible “operations de nettoyage” or clean-up measures.

Just like today, with Syria teeming with Russian mercenaries and foreign Shia militia brought in by Iran, the French sent foreign mercenaries. They were said to be especially brutal.

Much later, as Ms Darke writes, “France was willing to sacrifice Syria’s territorial integrity for the sake of its own larger international intersts”.

France created Lebanon, gave the Alexandretta province to Turkey in 1939 in return for Turkish neutrality in WWII and in 1948, Palestine was lost.

Thus, the area long known as ‘Natural Syria’ (300,000 sq km that encompassed what is now modern Syria, Lebanon, Jordan, Palestine, Israel and even parts of southeast Turkey) was amputated by more than half. About 185,000 sq km – Lebanon, Jordan, Palestine, Israel and parts of southeast turkey – was either forcibly trimmed off, or cannily bartered away.

That was a quick turnaround by the Europeans. Throughout their 400 years rule from the 16th century, the Ottomans had never drawn an actual territorial border for Syria, but had administered it in a number of divisions called vilayets. That was known as ‘Natural Syria’. Its rapid and ill-considered mutilation must surely have induced trauma.

The centuries-long relative quiet of the Ottoman provinces in the Middle East had now been shattered by the intervention of Britain and France after World War One, and the creation of their respective mandates.

Syria, Lebanon, Iraq and Palestine were about to become some of the most unstable and explosive states in the world. 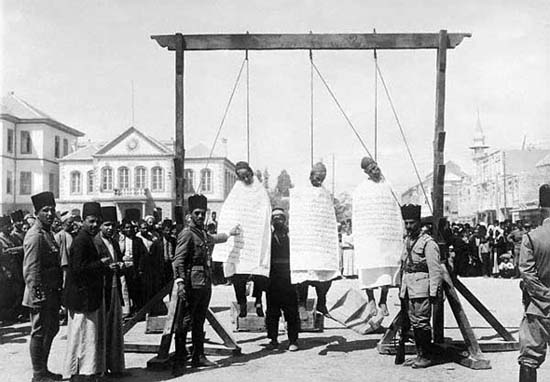