Using Dall-E 2, an AI image-generation tool, I created a Turner painting of an ordinary neighbourhood in Greenwich in the 21st century. Take a look. Pretty good, wouldn’t you say?

The oddest thing of all, of course, is to be turning out a Turner painting 173 years after the death of the painter.  Dall-E 2 suggests the following caption:

A Turner painting of a middle class neighbourhood in Greenwich, London in the 21st century

Turner is known for the way he coloured imagined landscapes, painted more than 550 oils, 2,000 watercolours, and 30,000 works on paper. I can see some of that style in these AI-scapes.

Turner’s violent seascapes are unforgettable once you’ve seen them. Take a look at a real Turner (the last image). It is of an 1840 painting titled Slavers throwing overboard the Dead and Dying — Typhoon coming on. There is a sense of that bright sky from Slavers in some of the AI-scape images.

It’s pretty cheeky to be employing Turner to do a painting of a 21st century London neighbourhood (complete with automobiles, which wouldn’t be invented by Carl Benz until 35 years after the painter’s death).

But then as art critics have made two noteworthy points about AI-generated art : the tech appears amazing and so are the wild leaps of imagination of its users. So we get Da Vinci’s The Last Supper with the apostles crowding round to take a selfie, the French Revolution as seen from the perspective of a helmet-mounted GoPro camera…and a Turner painting of a 21st century Greenwich neighbourhood. 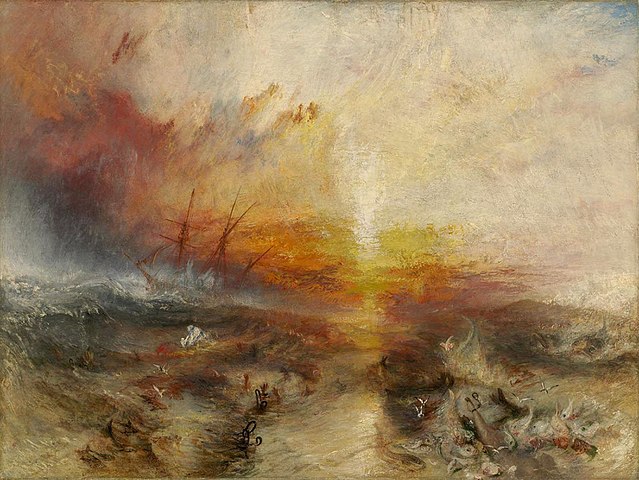